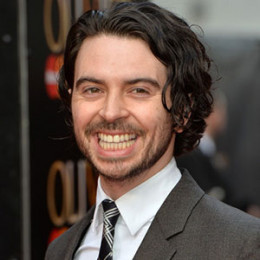 Who is Ryan Gage Dating? Know about his Personal Life & Relationship Status;

Ryan Gage is in a lovey-dovey relationship with his longterm girlfriend, Tiffany Ceri. The well-known actor has never been engaged or married till date.

But assuming the beautiful chemistry between two, Ryan and Tiffany are waiting for the right time to walk down the aisle. They began kindling romance from March 13, 2015.

Except for his sweetheart, Gage is never spotted with any ladies on PDA or went on romantic dates. The Hobbit actor and his spouse-to-be celebrated their fifth anniversary on March 13, 2020 commemorating their first date.

Famous British actor Ryan Gage in one of his Theatre programme.

The 37 years old actor is currently relishing blissful live-in together relationship with his partner but it's not yet confirmed if the pair had any children.

What is the Net Worth of Ryan Gage?

Ryan Gage holds an estimated net worth of $2 million all thanks to his acting career. The famous English actor is involved in many professions and earns thousands of dollars weekly by working in many projects.

The 36-year-old actor first debuted in television by working in The Bill intitled TV series programme with the role of Carl Buxton for two episodes. This role helped him to catch the attention of many directors and since then he appeared in numerous television series which includes The Musketeers, Doctors and many more.

Gage also worked in several hit movies and is best known for his acting in The Hobbit: The Desolation of Smaug and it's sequel The Hobbit: The Battle of the Five Armies. Both of the movies includes big names such as Richard Armitage, Benedict Cumberbatch, Evangeline Lilly, Orlando Bloom. The films were blockbuster and hit the box office by $2.93 billion against the budget of $745 million. Likewise, the English actor also worked in movies like Outlaw, A Hundred Streets and many more.

Ryan is also a constant theatre performer and has worked in many shows in the starting from the year 2006 to 2017. Some of his theatre titles are The Miser, American Justice, Ghost Stories.

Ryan Gage was born on 17 January 1983 in England, the United Kindom with Capricorn birth sign. He currently resides in London England. Despite being a famous actor he managed to keep his personal life a low-key.

The Hobbit actor Ryan Gage at the European Premiere Of The Legend Of Tarzan.
SOURCE: Aceshowbiz

The brown-eyed actor first appeared infront of the camera in 1995 and since then he garnered a lot of love and support with a great excess of money. After grabbing fame he also worked with some video games named Final Fantasy XIV: Heavensward in 2014 and Bloodborne in 2015.

Ryan is an active person on social media as he uses Twitter and Facebook from time to time. Until now, the acting sensation has collected over 24.5k+ followers on Twitter.