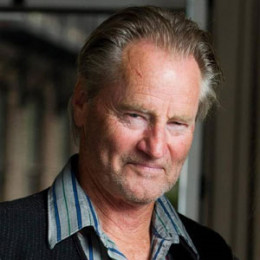 Sam Shepard was a multiple OBIE Award-winning American playwright actor, author, screenwriter, and director whose work is still praised in the film industry. He served the industry for over half century.

New York magazine stated him as "the greatest American playwright of his generation". He received an Academy Award nomination for Best Supporting Actor for his role as pilot Chuck Yeager in The Right Stuff.

Sam attended Duarte High School in Duarte, California. He then attended Mt. San Antonio College and studied animal husbandry before dropping out. While in college he became enamored of Samuel Beckett jazz and abstract expressionism.

Shepard began his career working as a busboy at The Village Gate in New York City. He then joined in Off-Off-Broadway theatre in 1962. In 1964 he performed in the plays like Cowboys and The Rock Garden.

Among the more than 40 plays that he wrote, eleven have won OBIE awards. Some of his hit plays are Buried Child, The Late Henry Moss, Simpatico, Curse of the Starving Class, True West, Fool for Love, A Lie of the Mind, and the States of Shock.

Shepard made his big screen debut with the major role in Days of Heaven in 1978 featuring Richard Gere and Brooke Adams. He then got an opportunity to play in an array of films such as Resurrection in 1980, The Right Stuff in 1983, Black Hawk Down in 2001, Blackthorn in 2011 and Never Here in 2014. The Right Stuff earned him an Academy Award Nomination for Best Supporting Actor.

Furthermore, Sam became a teacher taking classes and seminars in several theater workshops, festivals and universities on writing plays. In 1986 he was elected a Fellow of the American Academy of Arts and Sciences.

In 2000, his play The Late Henry Moss was performed in MagicTheatre starring Nick Nolte, Sean Penn, Woody Harrelson, and Cheech Marin. For his play Buried Child, he also received Pulitzer Prize for Drama in 1979. He conquered PEN/Laura Pels International Foundation for Theatre Award as a master American dramatist in 2009. He was described a The greatest American playwright of his generation by New York magazine.

Shepard married twice in his life. Actress O-Lan Jones was his first wife. They married in 1969 and had a son named Jessed Mojo, born in 1970. Jessed is a renowned author.

After fifteen long years of their marriage, the duo divorced in 1984. He had an extramarital affair with musician Patti Smith since 1971 for a year.

In 1983 he married an Academy Award-winning actress Jessica Lange. They stayed as a husband and wife until 2009. He had two children Hannah Jane and Samuel Walker Shepard from his ex-wife Jessica.

Scuffles with the law

In the year 2009, Sam got arrested and charged with speeding and drunken driving in Normal, Illinois. He pleaded guilty to both charges and was sentenced to 24 months probation alcohol education classes and 100 hours of community service. He was again arrested for aggravated drunk driving in May 2015.

The talented and accomplished actor Sam died at the age of 73. He died of Lou Gehrig’s disease, a complication of amyotrophic lateral sclerosis, in his home in Kentucky. The country lost such talented personality on July 27, 2017. His void can never be filled and even in his absence, his work would be praised in the future.

Shepard earned quite a lucrative amount when he was alive. His estimated net worth was $8 million.

O-Lan Jones was the ex-wife of Sam Shepard. They married in 1969 and eventually split up in 1984.

Jesse Mojo Shepard is the first child of Sam Shepard from his ex-wife O-Lan Jones. He was born in 1970.

Hanna Jane is the second child and only daughter of Sam Shepard from his ex-wife Jessica Lange. She was born in 1985.

Samuel Walker Shepard is the youngest son of Sam Shepard from his ex-wife, Jessica. He was born in 1987.