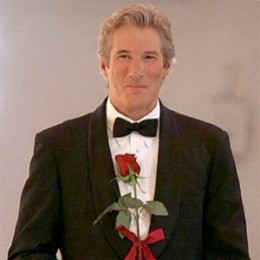 American actor and humanitarian activist, Richard Gere made his Hollywood debut from the movie, Report to the Commissioner. Gere before appearing in movies used to act in theaters and shows. For his amazing work, he has owned several prestigious awards. Gere is currently dating a businesswoman who is half his age.

Richard Gere was born Richard Tiffany Gere on 31st August 1949 in Philadelphia, Pennsylvania. Gere is American as per the nationality and as far as his ethnicity is concerned, he is White.

In 1967, Gere graduated from North Syracuse Central High School, where he outshined in music (playing trumpet) and gymnastics. Later, he attended the University of Massachusetts Amherst on a gymnastics scholarship to earn a degree in philosophy but left the college after two years.

Richard Gere at the very initial stage of his acting career, performed in stage shows and theater. Some of the plays include, Rosencrantz and Guildenstern Are Dead at the Seattle Repertory Theater and Province Playhouse, Grease, Bent by Broadways. Gere earned a Theater World Award for his amazing performances.

In 1974, Gere was selected for the role in The Lords of Flatbush but was replaced after the fight with the lead actor, Sylvester Stallone. A year later, he starred in the movie, Report to the Commissioner opposite Michael Moriarty, Susan Blakely, Yaphet Koto, Hector Elizondo and William Devane among others.

Gere appeared in numbers of movies and TV series including The Cotton Club, An Officer and a Gentleman, Arbitrage, I’m Not There, Runaway Bride and Norman: The Moderate Rise and Tragic Fall of a New York Fixer among others.

Gere, however, is best known for his role in Looking for Mr. Goodbar, Days of Heaven, Pretty Women, and Chicago.

Richard Gere won nominations for various prestigious awards for his brilliant performances. Among them, Gere won some of them including:

Richard Gere is also a humanitarian activist and a longtime follower of Buddhism. He co-founded Tibet house and became the chairman of the International Campaign for Tibet. He also established a Gere Foundation to support human rights and supports Dalai Lama.

Gere devoted most of the time to political and social causes for which was he was honored with several awards. He also involved in awareness programs in several places related to AIDS.

Richard Gere, a leading Hollywood actor is currently in a relationship with Alejandra Silva, a Spanish publicist and a businesswoman, since 2015. The couple met for the first time at the Taormina Film Festival and eventually began dating. Despite their age differences, the couple is happy together.

Recently, in an event of the Rais Foundation in Madrid, Silva was spotted with a diamond ring. The engaged couple got married in early April 2018.

They chose a super private ceremony at their Bedford, New York home to tie the knot. As per August 2018, the couple is expecting their first child together.

He gave a surprise declaration of his love to his wife as he took the stage at the 2019 Golden Globe Awards to present the award for Best Actor in Drama Motion Picture category.

"Alejandra, I love you! You can go to sleep now."

The 69-year-old star is best known among his fans and media to keep his personal life under the radar and this time, he definitely surprised his fans and, of course, his lovely wife.

Richard Gere gave his wife Alejandra Silva the best kind of shout out at the #GoldenGlobes - permission to go to sleep! pic.twitter.com/uLV2ZPSfx3

Before this, Gere has been married twice. In 1991, he married Cindy Crawford, American model, and actress. Some years later, the couple separated for some unknown reason.

Carey Lowell, American actress is his second wife, married in 2002 after dating for several months. The couple together shares a baby named, Homer James Jigme Gere. Their marriage was counted as one of the most successful marriages in Hollywood. But that did not last long after they filed for a divorce secretly in 2013.

In 2016, they ended their decade of relationship. Besides these, Gere had an affair with Priscilla Presley, Kim Basinger, and Penelope Milford.

In 1999, People’s magazine named him as Sexiest Man Alive and was also known as a sex symbol.

Richard Gere, 69, who began his career from theaters, as of now, has an impressive net worth of $100 million as per the Richest and $120 million as per Celebrity Net worth.

Gere’s films are his major source of income from where he makes a good amount. Some of his movies that made a good collection at the box office include:

Gere has appeared in the commercial of Fiat too. Gere endorsed Hillary Clinton for president and donated $2700.

On 12th December 1991, Richard Gere married to his first wife, Cindy Crawford. Living together for some years, the couple got divorced on1 December 1995.

After the first separation, Richard Gere tied the knot for the second time with American actress, Carey Lowell on 9 November 2002 after dating for several months. On 18th October 2016 the couple divorced with the reason of differnt livestyles.

Homer James Jigme Gere id the first child of Richard Gere and Cary Lowell who was born on 6th February 2000 before their marriage.