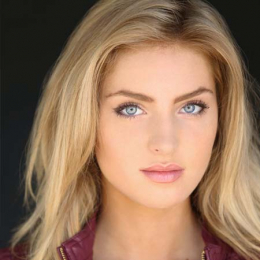 American actress, Saxon Sharbino is best known for portraying the role of Amelia Robbins in the Fox series Touch and Kendra Bowen in the 2015 films Poltergeist. She is also known for her roles in the film and television series like Trust Me, Be Earthing, Julia X, and Law & Order: SVC.

Saxon Sharbino is possibly single as of now. The gorgeous actress seems focused on her career as she is out of any relationships. Though she's out of dating rumors now, she was previously in a relationship with YouTuber Jake Paul.

Paul and Sharbino started dating in 2014 when Jake moved to LA. The former pair reconnected in 2017 in order to make a YouTube video.

Saxon is out of any dating rumors and is never a part of any media controversies. She stated her relationship via a Twitter post back in 2014 soon after her break up with Jake Paul.

Apart from Saxon's dating relationship with Paul, she also dated another YouTube star Andrey Smygov. The relationship of the duo was public in September of 2015. Andrey even tweeted explaining Saxon as his girlfriend,

Later, he shared another post confessing his love for Saxon and thanked her to buy him a new phone,

Despite this much love and support, they broke up regarding their personal issues. In fact, Andrew even shared a video on 6th April 2016, where he talked about his relationship with Saxon and their breakup.

It looks like the actress is waiting for her soul mate along with pursuing her acting career. Additionally, she is an active social media user and shares many posts regarding her daily schedule.

What is the Net Worth of Saxon Sharbino? Know about her Earnings, Salary

@fashionnova The last time I went to my basketball court I only went there bc it was full of balloons. @dawnkingston

My first @rams game was a playoff victory against my home team @dallascowboys who do you think will win the #superbowl ?

The 19-year-old actress started her career in the film industry by working in the 2010 film Red, White & Blue. Since then, she appeared in many films like Earthling, Julia X, Trust Me and Bedeviled. Besides, her movie Poltergeist was a blockbuster which collected a total of $95.4 million against the budget of $35 million. The movie starred actors like Jane Adams, Sam Rockwell, and Jared Harris.

Saxon Sharbino was on 11 June 1999 in Lewisville, Texas, the United States as Saxon Paige Sharbino. She holds American nationality and was born under the Gemini star sign.

The Love actress attended Bridlewood Elementary School but later finished her school career while studying at the home. She later joined the Downing Middle School. She later moved to  Los Angeles, California in 2013 along with her parents.