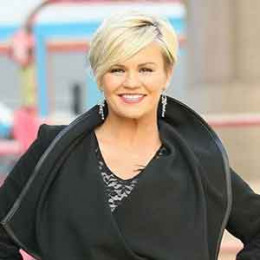 Shawn Killinger is a news personality currently working for QVC Network as a senior reporter. She is married to Joe Caretta and has 2 stepsons from Joe's ex. The couple had been struggling with having a baby and had also faced a heartbreak as they had a miscarriage of a 5 months old daughter but the couple moved on from the disaster and later adopted a baby.

Shawn Killinger was born on November 2, 1979, in Detroit, USA. Her nationality is known to be American and she belongs to white ethnicity. Shawn was born into a middle-class family and she had moved to Mexico City along with her family when she was just 11 years of age and lived there for 4 years.

Eventually, she came back to the states to complete her education. She studied in International American School Foundation during her stay in Mexico and later attended Pennsylvania State University from where she completed her Bachelor’s degree in Marketing Management. She has also studied abroad in Geneva, Switzerland through a study abroad program.

Shawn started her career working at CBS and later moved to several big platforms including FOX, NBC, and QVC. At the beginning of her career, Killinger moved to New York City to establish herself in the journalism industry.

Initially, she started by contributing to CBS’s Page Program and later started working at evening news programs. Shawn started working in front of the camera while she was appointed by WUHF-TV as a general assignment reporter in Rochester, New York.

She started gaining momentum in her popularity due to her outstanding performance and commanding anchoring skills along with her admirable physique.

The year 2005 turned out to be the luckiest year of her professional life as she reached on the top 16 in NBC’s endeavor of a prime time Martha Stewarts "Apprentice" beating thousands of competitors. At present, Shawn is working for QVC Network as a senior reporter and a television host which is offering her a massive amount of salary.

Before Shawn suffered from kidney cancer, she definitely had an active love life. However, it is clear that Shawn’s cancer only hampered her professional and personal stability for a while. This beautiful and courageous woman snapped out of the misfortune and carried on and has moved forward in life.

Twinning or what?!?! Uh duh! JT and I on our wedding days. Oh cmon, it’s practically the Olsen twins. @janetreacyqvc and i r back at it tonight starting at 6pET w #tuesdayvibes. Janes Closet is up first, then @josiemarancosmetics and Jane, then Shoe Shopping w Jagger we JANE (). I join at 9pET w @peaceloveworld @peacelovealina and then THE FIND makes a triumphant return... #shawnkillingerqvc #janetreacyqvc #shawnkillinger #janetreacy #weddingbells #loveisintheair #twinsisters

She is married to her husband Joe Carretta at the moment. The two met each other through a dating website and eventually, after months of dating, they got married.

Although she is a media personality, Shawn’s husband Joe works a normal job as a business consultant and an entrepreneur. Fortunately, there has been no rumors and news about this lovely couple’s divorce or extramarital affairs.

Best. Tuesday. Twinning. [email protected] and i - channeling mom twins - are back at it tonight w #tuesdayvibes ?? JT is on-air right now rocking out Shoe Shopping...and b4 u know it I’ll be hopping on for 3hrs of beauty to finish off ur night. #janetreacy #janetreacyqvc #shawnkillinger #shawnkillingerqvc #twinsisters #mustseetv #momsknowbest

The couple has been open about their struggle in conceiving a baby. She eventually came out with a heartfelt Facebook post detailing her unfortunate miscarriage while five months pregnant with a daughter. But she has two stepsons from Joe’s first marriage, and the couple also adopted a baby girl named Jagger Jude in June 2017.

Shawn Killinger’s net worth is not revealed yet, however, she has worked with many companies and as a journalist, her net worth can be estimated to be in millions. She is receiving a good salary from her work with QVC, which has added to her net worth.

And her husband being a businessman, the combined wealth of them both brings their net worth to almost $1 million dollars. In current time, Shawn has a house in Philadelphia where she lives with her husband and sons.

Shawn’s husband Joe works a normal job as a business consultant and an entrepreneur. Things seem to be going pretty good for the couple and there has been no news of any divorce or extramarital affairs in the duo's relationship.