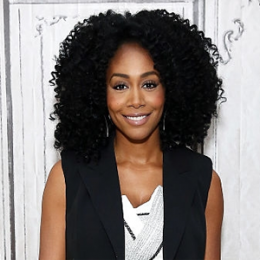 American actress, Simone Missick is popularly known for her roles in The Defenders, and Iron Fist. Missick made her Hollywood debut from the movie, The Epicureans. She is best recognized for her portrayal as Detective Misty Knight in an American TV series, Luke Cage. Missick is a married woman but has no children yet. She is currently living happily with her husband.

Simone Missick was born as Simone Cook on 19th January 1982 in Detroit, Michigan under the birth sign Capricorn. Missick is American as per her nationality and as far as her ethnicity is concerned, she is African-American.

Missick was a captain of her high school basketball team. In 2003, she graduated with a BA degree from Howard University. Missick also joined the British American Drama Academy Oxford.

Missick then appeared in numbers of movies and TV series. Her works include The Road to Sundance, K-Town, Brotherlee, Ray Donovan, Scandal and Wayward Pines among others.

Missick is popularly known for her notable roles in the movies and series like- A Taste of Romance, Luke Cage, and The Defenders.

In 2016’s Netflix series, Luke Cage, she appeared with Mike Colter, Alfre Woodard, Rosario Dawson, and Theo Rossi among others. She shared the screen with Sigourney Weaver, Krysten Ritter, Charlie Cox, Finn Jones and Jon Bernthal among others in The Defenders.

As of now, she is working on another Netflix’s series, Iron Fist. She worked in the TV series with Finn Jones, Jessica Henwick, Jessica Stroup, David Wenham, Tom Pelphrey, and Rosario Dawson among others.

Simone Missick is a married woman. Missick married her boyfriend, Dorian Missick on 19th February 2012 in a cozy ceremony in the presence of limited guests. Her husband is American actor popularly known for his roles in Six Degrees as Damian.

Merry Christmas from the Missicks  This has been such a tremendous year of life and loss, but more love than I can handle. I’ve got an amazing husband, puppy , friends and family. I am thankful for health, and wealth of happiness and I pray you have that as well. May you enjoy the holiday season with people you love. #christmas2018

Missick is a romantic wife and a beloved one for her husband. The couple shared great chemistry and is happy together. It’s been years that they are together but has no children yet. She shared many pictures with her husband on her Instagram account.

Simone Missick, now 36, has the height of 5 feet 4 inches (1.63m). Missick who is popularly known for her role, Misty Knight might have an estimated net worth close to millions. However, the exact amount is not yet made official.

According to networthpost, she has a net worth of $1 million. She is living a luxurious life with her husband as seen on her Instagram account.

On 19 February 2012, Simone Missick tied the knot with Dorian Missick in a private ceremony. Dorian is American actor known for his roles in Six Degrees.