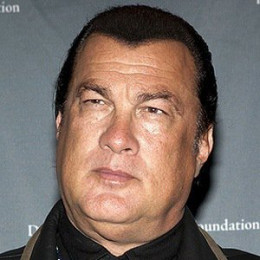 Steven Frederic Seagal is an American actor, film producer and martial artist. His mother, Patricia, was a medical technician, and his father, Samuel Seagal, was a high school math teacher. He attended Buena Park High School in Buena Park, California. Seagal began his adult life as a martial arts instructor in Japan. In 1988, Seagal made his acting debut in Above the Law. He is also an accomplished guitarist; having released two studio albums , and performed on a number of film scores. As the founder of Steven Seagal Enterprises, he began to market his own energy drink, Lightning Bolt, in 2005.

Although Steven Seagal had married four times, none of his marriages so far have lasted more than 10 years. In the 1970s he was in a marital relationship with his first wife and for around ten years. Then he shared his vow with an actress and this relationship also lasted only for three years. Again after this relationship, he met another model and actress and married her for around seven years. Then finally he met his soulmate, a dancer by profession with whom he is happily married till the date. There is no sign of breakup or any issues till the date.

Steven Seagal was born Steven Frederic Seagal on  April 10, 1952, is widely recognized as the multi-talented personality as he involves in acting, producing, martial arts, musician and directing.

Unlike other celebrities, Seagal holds three citizenship; American, Russian, and Serbian. He was born in Lansing, Michigan to parents Patricia and Samuel Seagal. His mother Patricia was a medical technician while his father Samuel Seagal was a high school math teacher.

At the age of 5, he was relocated to Fullerton, California with his parents. During his early age, he suffered from asthma but slowly recovered from it after moving from Michigan. 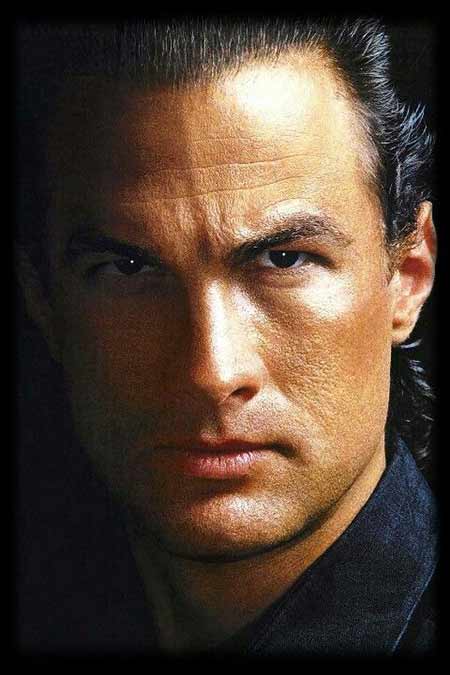 Seagal attended the Buena Park High School which was located in Buena Park, California. Before pursuing his career on Hollywood, he served as a dishwasher and later learned martial arts.

Steven choreographed some martial arts fight scenes in movies early in his career. However, his acting debut occurred in the 1987 film Above the Law.

After his martial arts action hero image, he was offered the lead roles in Hard to Kill (1989) and Under Siege (1992), which was considered his most popular movies.

Later, Seagal enrolled himself in directing movies, he made his debut with the commercial failure On Deadly Ground as both an actor and director. Seagal's more recent works have fallen on hard commercial times with the exception of Exit Wounds in 2001, which accumulated almost $80 million worldwide.

The actor has done a great job over his career and earned lots of names and fame. Just like his glorious career his net worth is also quite impressive as he succeeded to earned an estimated net worth of $16 million.

Besides he also has a house in Brentwood, Los Angeles and owns a dude ranch in Colorado. As for his cars, he has a huge collection of it. He owns a black Ford F-150 which he bought in 2012 and is worth $34,887.

The 65-year-old action hero married four times and shared seven children. In 1975, he exchanged vows with Miyako Fujitani but after 11 years of togetherness, the duo divorced in 1986. They have two children; son Kentaro and daughter Ayako. Later Adrienne LaRussa became his second wife but just like his first marriage this one also couldn't last long and the couple split in 1987.

Just after his divorce with Adrienne, he started an affair with actress Kelly LeBrock. The pair tied a knot in 1987 and shared two daughters; Annaliza Seagal and Arissa and son Dominic Seagal. However, they separated in 1996 and the reason behind their divorce was Segal extramarital affair with his children's nanny Arissa Wolf with whom he has one daughter Savannah.

Currently, he is in a blissful relationship with Erdenetuya Batsukh. The couple got married in 2009 and share one adorable child named Kunzang who was born on September 17, 2009. She worked as an Interpreter for Seagal during his visit to Mongolia in 2001 and first met in Outer Mongolia when he was raising money to finance his biopic movie of Genghis Khan. 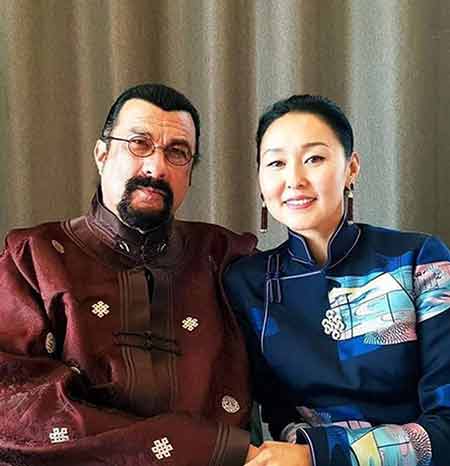 In 2011 Seagal was sued for $100k by a man named Llovera after they found him riding a tank in their home and killing their puppy. He was even told to write a written apology to Llovera and his children for killing their beloved puppy. Seagal was part of the animal cruelty bust and to satisfy his pet peeves he decided to join the Sheriffs.

This needed several armored cars, a tank, and numerous sheriff's deputies & they were on the ride to kill hundreds of roosters and a puppy in their journey. In November 2016, he was granted Russian citizenship by Russian President Vladimir Putin and he lives there often.

Here is a video of Steven Seagal's 15 things that no one knows about.

She is an Aikido master and instructor and dojo owner. Steven and Miyako met in California in fall of 1974. They married in December 1974 and had two children together. Their divorce was final in 1987.

An actress and real estate agent, Adrienne's marriage to Steven in 1984 was annulled. Adrienne later married Robert French in 1987.

Steven and Kelly, a model and actress, first met in Japan. They were married on September 5, 1987 at their home in Beverly Hills, California. They had three children together. After their separation on October 1, 1994, Kelly filed for divorce on October 31, 1994. Their divorce was final in November 1994. Kelly's first marriage was to producer Victor Drai from 1984-1986. The marriage ended in divorce. In July 2007, Kelly married retired investment banker Fred Steck.

Elle, who is from Mongolia, and Steven met in Mongolia in 2001 when she worked as his interpreter. Elle is a professional dancer. They have one son.

Born in 1975, Kentaro has worked as a model, an actor, and an Aikido instructor.

Born in 1979 in Osaka Japan, Ayako is an actress and writer.

She is the first daughter to this parents.

He is the first the couple welcomed.

The second daughter and the third child born to this family.

The first and the only child born to this family.

The only baby boy born to this family.