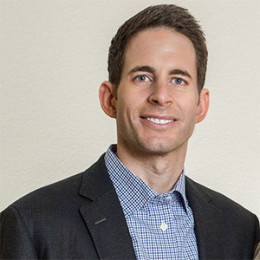 Tarek El Moussa is a well-known TV personality and a real estate investor. He earned popularity as a host of HGTV’s hit reality TV series, Flip or Flop. Currently, the series is running its seventh season. Received his real estate license at the age of 21, he successfully runs the series with his ex-wife, Christina El Moussa.

Tarek El Moussa is best known as a TV personality and reality star, born on 21st August 1981. He grew up in Long Beach, California to American parents. His nationality is American, and he is of white ethnicity.

El Moussa's popular show 'Flip or Flop' is a television series aired on HGTV hosted by real estate agents and real-life 'then' husband and wife Tarek and his ex-wife Christina El Moussa.

El Moussa earned his real estate license at the age of 21. He met his wife Christina while working in the real estate industry. The couple sold real estate in the Southern California area.

The real estate business started to suffer when the housing market plummeted after the October 2008 stock market crash. The couple went to live in a home paying $6,000 to $7,000 per month for a few years.

Tarek and his wife Christina also runs a real-estate agency called 'Tarek and Christina: The El Moussa Group,' in Orange County, California. Their agency is an area with one of the largest foreclosure rates in the country.

El Moussa is currently a single father with two children. He was married to Christina Anstead on the HGTV’s show ‘Flip or Flip.’ The couple tied the knot in 2009. She gave birth to her first child, a daughter named Taylor Reese El Moussa in 2010 including a son Brayden El Moussa born in 2015.

Everything was going right until 2016 when his wife filed for divorce. They were together for almost seven years before the divorce was filed. The couple ended their marriage in May 2016. They announced their separation in December 2016. In January 2017, the pair officially filed divorce citing irreconcilable differences.

El Moussa dated Alyssa Logan, his family’s nanny after splitting with his wife, Christina. They started dating in September 2016. She took care of the couple’s two children during the time. The pair had a short-time relationship, as they separated after one month of the relationship.

At first, the couple filed for the custody and later Tarek and Christina co-parent their children. He loves spending his leisure time with his children. Christina is also taking her time to focus on her children and herself.

Currently, Tarek and Christina host their show called Flip or Flop. The show debuted on HGTV in 2013. The show is running its seventh season and has crossed more than 90 episodes. The pair signed a deal with the network in 2012, and they are successfully running the show until the present time.

Tarek admitted that he has no bad blood with his ex-wife Christina's new husband. After the divorce, Christina secretly tied the knot to British TV personality Ant Anstead on 22 December 2018 at their Newport Beach, California home. The couple had been dating since November 2017.

During an interview with PEOPLE, Tarek said,

Christina and her husband announced that they were expecting their first child. They announced the news via Instagram.

@ant_anstead and I are so excited to announce #babyanstead coming this September!! The kids are all so excited to meet their new sibling ♥️ #5 #Gonnaneedabiggercar!

Following the post, Tarek also shared a sweet post along with his children. Check out this picture,

My loves my life my everything .. this picture represents the most important part of my life...being a father!!!!! . No matter what happens during my day...I never take negativity home with me. When I have my babies I come home and can’t help but smile. I smile because I know no matter what we all love each other and nothing can break our bond. I just adore these two:). . I’m starting a new episode with @robertdrenk today...who’s excited for his debut . I’m so excited for tays soccer game tomorrow, do you have any fun plans!?? .

In 2013, El Moussa faced both thyroid and testicular cancer. It was noticed after a fan saw a lump on his neck during the show. The viewer, who was a nurse also warned him that he might have cancer and suggested him to examine. He was diagnosed with cancer after a week.

Moussa is now determined to save lives since he has beaten his cancers. He has teamed up the Movember Foundation. The organization raise awareness about men’s health and encourage early cancer detection.

Tarek El Moussa has a net worth of $10 million. The pair has made a huge amount of money their show, Flip or Flop.

Christina El Moussa is the name of his wife.This couple was selling real estate in the southern California area.