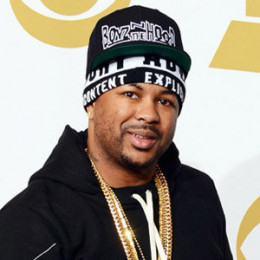 The-Dream is a songwriter, singer and record producer. At the age of two, he moved with his mother to Atlanta. He co-wrote Britney Spears' hit "Me Against the Music" from her album "In the Zone". The-Dream released five studio albums between 2007 and 2013 such as Love Hate, Love vs. Money, Love King, Terius Nash: 1977 and IV Play. His co-writing credits include songs with Dear Jayne, "Me Against the Music" for Britney Spears, "Umbrella" for Rihanna, "Single Ladies (Put a Ring on It)" for Beyoncé and many more.

The-Dream was previously married to his girlfriend Nivea in 2004 but the married couple filed for legal separation and divorced in 2008. After that, he was in a relationship with Christina Milian and after dating a few months couple married on September 4, 2009, but they separated in 2011. Then briefly The-Dream dated Lydia Nam. Currently, he is married to Lalonne Martinez in July 2014. The-Dream is the father of eight children.

The-Dream was born as Terius Youngdell Nash on September 20, 1977, in Rockingham city in North Carolina, United States. There’s no information on The–Dream’s father, whereas his mother Reva Nash passed away in 1992 when he was 15.

The-Dream has eight children with multiple women. In 2004, Nash married singer Nivea. They had three children, a daughter named Navy Talia Nash, and two twin sons named Christian Nash and London Nash. In 2008, they were separated.

In 2009, he announced his engagement to singer Christina Milian. They married but divorced before the birth of their child, Violet Madison Nash.

The-Dream has also been in relationships with the Canadian model Kris Jacobs, as well as with the British singer, songwriter and actress Tulisa. Then in 2012, Nash dated Lydia Nam and had one son together whom they welcomed in 2013.

Nash has also been in the center of controversies. Due to an alleged domestic violence in Newport Beach, California in 2013, he was caught by the police. However, his then-girlfriend Lydia refused to press charges.

Later in 2014, Nash was arrested for felony assault and strangulation against his then-pregnant girlfriend Lydia.

The-Dream's net worth is estimated to be $10 million. His source of income includes his salary and earnings from his career as singer, songwriter, record producer and rapper.

Moreover, Nash owns a mansion in Atlanta, Georgia worth $1.5 million. He also owns a Ferrari as his personal ride.

The-Dream was previously married to his girlfriend Nivea in 2004 but the marriage couple filed for legal separation and divorced in 2008.

After that, he was a relationship with Christina Milian and after dating few months couple married on September 4, 2009, but they separated in 2011.

Currently, he is married to Lalonne Martinez in July 2014. The couple seems to be very happy with each other so no signs of separation.

The-Dream is the father of seven children. His daughter Navy Talia was born on May 10, 2005.

Christian was born on April 19, 2006. He was his twin brother and he has five siblings.

He has two sons from his current wife. Lord was born in the year 2016.

Heir was born in the summer of 2015. He has six siblings but his two siblings' name has not publicly disclosed.