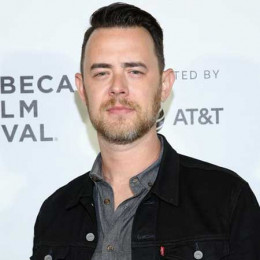 Colin Hanks is an American actor and movie director famous for his role in movies "Orange Country," "King Kong" and "Frago." He also voiced the lead character Tom in "The Talking Tom." Colin is a son of renowned actor Tom Hanks, who is two-time Oscar winner.

Colin grew up along with his younger sister Elizabeth and two other half-brothers, Chester Marlon Hanks and Turman Theodore Hanks.

Being the son of renowned actor, he followed his father's footstep and studied theater at Loyola Marymount University, California. During his school life, he performed in numerous student films and countless theatrical productions.

Colin started his acting career from the movie "That Thing You Do!" in the year 1996. Before that, he made an appearance in the film as a production assistant for the movie "Apollo 13" in 1995. The following year Hanks was cast in the movie "Whatever It Takes" portraying the character of Paul Newby.

After receiving popularity from the comedy movie "Orange Country" and Peter Jackson's "King Kong," he landed a lead role in the action-comedy TV series "The Good Guys" which aired on Fox.

Colin has also directed a documentary "All Things Must Pass: The Rise and Fall of Tower Records" in 2015. In the same year, he voiced the character Tom in the show "The Talking Tom and Friends."

Colin's dedication and hard work have made him one of the most successful celebrities in the Hollywood industry. Some of his popular movies are"Vacation," "Elvis & Nixon." Hanks recently appeared in "Band Aid" which released on 2nd June 2017.

During college days, Colin dated Busy Philipps. But their romance didn't last long. He also had an affair with Samantha Mathis but the pair only lasted for few months.

Later in 2009, he got engaged to Samantha Bryant, a former New York publicist and got married on 8th May 2010, in Los Angeles. The couple is blessed with two baby girls, Olivia and Charlotte.

Colin is really close to his family and equally, manages time between professional life and private life.

He also loves playing baseball and is a great fan of San Francisco Giant. Apart from this, he was the official correspondent of Kelvin and Bean LA Kings during 2012-13 seasons.

Colin has received huge popularity in the Hollywood industry. His source of income includes acting and directing. He has an estimated net worth of $15 million

Well, Colin engaged Samantha Bryant in June 2009 and got married on 8th May 2010. Samantha is a former New York publicist. The couple is blessed with two daughters named Olivia and Charlotte.

In 2011 Samantha and Colin became parents of a baby girl named Olivia.

The couple's second child is also a daughter. She was named Charlotte.