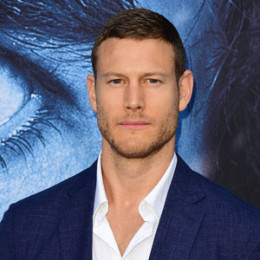 English actor, Tom Hopper made his big screen debut in 2007. Topper appeared in several movies and TV series like Saxon, Tormented, Cold, Casualty, Kingdom, and Merlin among others. Prior to this, he appeared in school and community theater plays. Hopper is married to his actress girlfriend, Laura Hopper. The couple has a child together.

Tom Hopper was born Thomas Edward Hopper on 28th January 1985 in Coalville, Leicestershire under the birth sign Aquarius. Hopper is British by nationality and belongs to Caucasian ethnicity.

Hopper attended Ashby School in Leicestershire. In 2006, he earned an honors degree in acting from Rose Bruford College. While in college, he participated in various theater plays including The Tempest, Festen, The Way of the World and Colliers Friday Night. At the initial phase of his career, he appeared in a production of As You Like It at England’s Watford Palace Theater.

Tom Hopper made his big screen debut in 2007, appearing in an independent movie, Saxon and an episode of the medical drama series, Casualty.

Following his debut he worked in movies Tormented, Cold, Northmen: A Viking Saga and Kill Ratio and appeared in series like Kingdom, Good Coop, and Black Sails among others. Among all his work, Hopper is best known for his roles in,

Hopper’s latest work includes 2018’s Netflix TV series, The Umbrella Academy by Jeremy Slater. In June 2006, he was voted as Expert Choice by The Stage at the Rose Bruford Acting Showcase.

Tom Hopper from his career as an actor has earned much of the amount, and his estimated net worth is in six digit figure. However, the amount is not made public.

Usually, TV actors earn between $150k-$1 million per episode as per their role.

Hopper supports awareness of colon cancer screening and treatment including other male-specific cancers like- penile and testicular cancer. He also supports the god rescue organization.

Tom Hopper married his girlfriend, Laura Hopper on 7th June 2014. The bride wore a white lace gown whereas the groom was in a black suit. His wife is also an actress.

The couple has a son, Freddie Hopper, born in 2015. The same year, he appeared on the cover of Men’s Health Magazine.

Hopper is a fitness freak and has a muscular physique. He loves rugby & golf and enjoys horse riding.

Below, the video is about Tom Hopper's biography:

On 7th June 2014, Tom Hopper married his actress girlfriend, Laura Hopper. The couple has a child together.