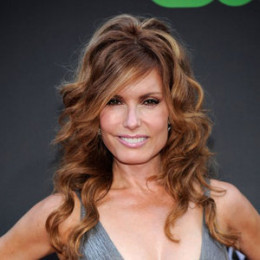 Tracey E. Bregman is one of the famous actress born to American musical arranger, record producer, and composer Buddy Bregman and Canadian-born actress Suzanne Lloyd. She is best known for the role of Lauren Fenmore on The Young and the Restless and The Bold and the Beautiful.

Who is Tracey E. Bregman Currently in Relationship with?

Tracey E. Bregman is currently dating the love of her life, Brian Landow. She and her beau kindled romance in 2015. Since then, they are going stronger and inseparable.

People began speculating after the two were often spotted together at public places such as movie theatre, eateries, shopping malls and so on. Nevertheless, the duo has not yet planned to upgrade their lovey-dovey bond into a healthy marriage relationship.

Tracey E. Bregman was in a marital relationship with her boyfriend, Ron Recht in 1987. She and her husband lived in a blissful intimate relationship for twenty years until they divorced in the year 2010.

Sex & Mrs. C star and partner, Recht were blessed with two sons, Austin and Landon. Even though, the couple sustained their relationship for decades they separated due to some personal reasons.

Her ex-husband fathered two stepdaughters from his estranged relationship. Tracey and her ex-spouse raised altogether four children while they were bound together.

How Much Is Tracey E. Bregman's Net Worth?

Tracey E. Bregman has an estimated net worth of $7 million at present. She receives a salary of $500-$1 million per year for her appearance in movies and TV series.

Some of her movie credits include The Concrete Jungle, The Funny Farm, Misogynist, and Happy Birthday to Me. Further, she has earned a nomination for best actress at the Los Angeles Underground Film Festival. Likewise, her television credits include The Love Boat, Spyder Games, and Days of our Lives. She worked with Melody Thomas Scott and Michelle Stafford in Days of Our Lives.

Bregman received a Daytime Emmy Award in 1985 for the Young and Restless. Most notably, She won two Young Artist Awards, a Soapy Award, an Online Film & Television Association Award. The 56-year-old is also an active supporter and honorary board member for Chenoa Manor, an animal sanctuary in Chester County, Pennsylvania.

In November 2018, Young and Restless star Tracey Bregman opened up about losing her home during the California Wildfires. She was able to get the man and their belongings into the car who worked for her.

Not only Tracey, but the devastating left thousands of people homeless and of course the actress is one of them. She posted a snap on her Instagram of her Malibu residence in flames writing "The last picture of my house. Thank God we are all safe".

Tracey E. Bregman was born in May 1963 in Munich, West Germany to Buddy Bregman and Canadian born actress Suzanne Lloyd. She lost her father in mid-2016.

Tracey lived in Great Britain until she and her family switched to California while she was ten. Bregman developed her interest in acting from an early age but made her film debut at 11 years.

Her marriage to Ron Recht lasted 23 years. Some of the beautiful moments they shared were so much heart touching that one could never imagine they would even get separated.