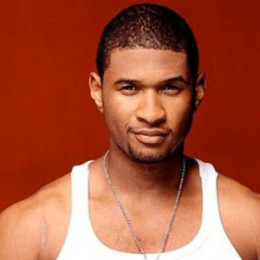 American singer, songwriter, dancer, and actor, Usher is a successful American R&B and pop musician. He started making music from 15 years of age. Usher is well known for his hit albums which include Confessions, Looking 4 Myself and My way. The album sold more than 1 million copies within a week. He subsequently produced the album Looking 4 Myself in June 2012 and placed at No. 1 on Billboard's albums chart.

Early Life and Education of Usher

R&B singer performer Usher was born Usher Raymond IV on October 14, 1978, in Dallas, Taxes, the United States to Jonetta Patton and Usher Raymond V. In his early age of six, he began singing in his church choir.

Usher entered in the fame game when he was 14. He moved to Atlanta with his mother and brother. After that, he landed a recording contract with LaFace Records after performing on Star Search. When he was 15, he launched his first, self-titled album in 1994.

He was brought up with his brother J.Lack. Regarding his ethnicity and nationality, he is a Black American. He attended North Springs High School while he was in Atlanta.

Usher as a professional singer, songwriter, and actor has accomplished a milestone in the field of entertainment. His popularity was well proven after he was signed as a judge for the famous musical reality show "The Voice".

Usher has managed to be exceptional musicians in the music industry from past 15 years. He launched a number of songs across several different musical categories, including R&B, blues, and pop. In the year 1997, he released his second album, My Way. After his success with My Way, he launched Usher Live in 1999. His two singles U Remind Me and U Don't Have to Call also received Grammy award.

On June 8, 2012, Usher released his seventh studio album Looking 4 Myself. After that, the song went viral and gained generally positive reviews from contemporary music critics.

Usher then launched his single album Climax which made a positive impact on the Urban radio on February 21, 2012. He announced his UR Experience Tour on August 25, 2014, in his eighth studio album UR. The UR Experience tour began in Montreal.

Prior to becoming a musician, Usher also worked as a film and stage actor. One of his earliest movies was 1998 teen thriller movie The Faculty. In addition to his acting on films, he made guest appearances on numerous TV shows including on the program American Dreams as a Marvin Gaye in 2002.

Usher was made public as one of the judges of the popular singing-competition series on NBC The Voice on March 25, 2013. He debuted on The Voice along with Shakira. Usher and Latin singer/actress Shakira replaced former judges Cee Lo Green and Christina Aguilera. Meanwhile, former Judges Adam Levine and Blake Shelton continued the show with them.

Usher, 38, rose to fame after launching his six-time Platinum-selling album My Way. This R&B superstar is married twice till date. Firstly, he tied the knot to an American wardrobe stylist Tameka Foster on September 1, 2007. The marriage was held at Chateau Elan Winery & Resort outside Atlanta.

The couple became parents to their first child, a son named Usher Raymond V, the same year they got married. After a year, Foster again gave birth to their second son Naviyd Ely Raymond on December 10, 2008.

However, in June 2009, Usher filed a divorce action against his Foster. On November 4, 2009, their divorce was finalized by Fulton County Court.

Moreover, after Usher’s oldest son Usher V became stuck in drained swimming in a pool at Usher’s home in Atlanta and was hospitalized in the ICU on August 5, 2013. His ex-wife Foster got into a legal battle to regain the custody of their two children, after this fatal accident. According to CNN, Tameka claims that the singer was “not capable of providing daily caregiving and supervision for the minor children" in her legal filing.

But the judge allowed Usher to retain the custody of his children and disagreed with his ex-wife Foster. Usher subsequently married his longtime girlfriend and manager Grace Miguel in September 2015. That his second wife Grace is a top executive at Def Jam Records.

According to the documents leaked online, he was the carrier of the herpes virus since 2009 or 2010. Also, he infected a woman with the virus. Sources reported that he paid the woman's doctor bills and settled a civil suit for $1.1 million.

Another woman filed a lawsuit against Usher for $10 million claiming that he exposed her to the virus without her knowledge. Later, the woman increased her lawsuit to $20 million after test positive.

Jermaine Dupri confirmed on The Breakfast Club studio show that Usher didn't have the virus in a response to Charlamagne tha God on 16 January 2018.

Usher and his wife Miguel informed US Weekly that the two were separating on 6 March 2018. He said in a statement,

"After much thought and consideration, we have mutually decided to separate as a couple ... We remain deeply connected, loving friends who will continue supporting each other through the next phases of our lives"

Usher filed for divorce from his wife on 28 December 2018 in Georgia.

Usher's Net Worth and Body Measurement

Usher is a well-known musician and is spreading the magic of rhymes from more than 15 years. He has earned a handsome amount of money which adds up his net worth from his singing career.

His net worth is estimated to be around $180 million as of 2019. Talking about his physical appearance USher is 5 feet 8 inches tall and his weight is 75kg.

Usher is also a benevolent person. He stays busy with his charity, New Loos Foundation. The project was set up in 1999 and works for children in foster care to providing funding and promote leadership skills for kids in impoverished communities.

Usher has gained recognition from such groups as the Trumpet Foundation, the Boys & Girls Clubs of America and National Association for the Advancement of Colored People.

Tameka Foster is an American wardrobe stylist and the ex-wife of singer Usher. She has worked as a personal stylist for Lauryn Hill, Jay-Z, Usher, Toni Braxton and many others.

Grace Miheul is a manager, is a top executive at Def Jam Records. She is well known for her marriage with Usher.