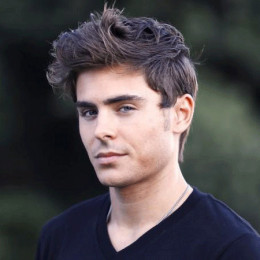 Zachary David Alexander Efron better known as "Zac Efron" is an actor and singer. For the films The Paperboy and The Lucky One, he won the ‘People’s Choice Award’ in the category ‘Favorite Dramatic Movie Actor’. He is the son of David Efron, an electrical engineer and Starla Baskett, a secretary who worked at a power plant. He attended Pacific Conservatory of the Performing Arts located in Santa Maria, California. In 2011, he was named the 5th Sexiest Man in Glamour's list of "50 Sexiest Men".

Zac Efron hasn't been married to anyone yet nor he's ever had any children. As it is obvious, being such a popular and handsome guy he has been through several serious relationships and break up.

He currently is dating a gorgeous model with whom he is spotted quite often. In April 2013, he entered rehab for cocaine abuse and excessive alcohol use.

Zac Efron is rumored of dating his Greatest Showman co-star Rebecca Ferguson but no official confirmation has come about it.

Some sources claimed that he was romantically linked with Vanessa Hudgens in 2005 while filming High School Musical.

Happy birthday to one of the the most real, down to, stunning, intelligent, creative, loving, and most rare Pokémon ever created #alexdaddario

He dated model and entrepreneur Sami Miro in September 2014. The couple broke up in April 2016.

In 2013, he went for treatment after struggling with alcoholism and substance abuse.

Like many other models and renowned celebrities, Efron adds thousands of dollars through ads and endorsements as well.

Zac Efron started his acting career in the early 2000s in TV series including Firefly, ER, and The Guardian.

He got his breakthrough in teen musical television film High School Musical in 2006 starring Vanessa Hudgens, Lucas Grabeel, Ashley Tisdale, and others.