21 Years New Zealand Actor KJ Apa Dating a Girlfriend or He Is Enjoying a Single Life? 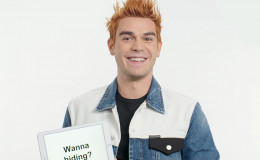 New Zealand actor Keneti James Fitzgerald aka 'KJ Apa' always are always so excited to know if he's still a single guy or dating someone special behind the bar. While Apa is still not ready to reveal his dating life, rumors about his romance always grabbed the media headlines that made him reveal the actual truth.

Besides his romantic life, he's in the media these days as a number of his secrets has been revealed and it's his fellow actor Cole Sprouse who did it all. Wanna know more? Let's get all the details below!

KJ Apa's Romantic Life: Is He Still Single or Dating a Girlfriend?

Unlike his Riverdale co-stars Cole Sprouse and Lili Reinhart who are pretty open about their dating life, KJ's maintained his personal life down low. Though he tried his best to keep himself away from all kinds of rumors about his romance, his love life has always been a topic to discuss among fans.

KJ Apa was spotted with a girl named Corinne Isherwood while traveling back to Vancouver earlier in January 2018 and it was definitely not the first time that the two were spotted together. He had his arm around her when they partied together on holidays and the pair were also spotted on a lunch date.

Some sources reportedly confirmed that the couple's been dating since November 2017 and Isherwood being just 16 years of age.

His on-screen romance with his co-star Camila Mendes made media to ask about their chemistry behind the scene in November 2018. KJ admitted,

"It's weird with someone you don't know that well. On a movie set, you have time to get to know the person and rehearse before shooting. Camila and I just had to dive into it. Now that we're friends, it's easier."

Furthermore, he confessed that dating in America is so different than in his native country.

Recommended: Riverdale Actress Camila Mendes is Rumored to be Dating. Find out about her Boyfriend and Affairs

"Guys in the States are a lot more confident than guys in New Zealand. There, if you go out with your mates, you all hang with one another because you're too scared to talk to the girls. Being in the U.S. has made me way more confident."

"Also, having a New Zealand accent increases your chances by like 50 percent."

Though Apa's fans and media is so curious about his girlfriend and romance, he's still not ready to spill the beans. Still, we are expecting to get the story very soon!

Cole Sprouse, this time, gained all the attention in media as he dished the dirt on his co-star and BFF Apa.

Discover: Lili Reinhart rumoredly Dating Cole Sprouse; Cole recently Untagged her from Photos on Instagram; Are they breaking up?

Well, things started when he met ZM's Megan, Vaughan, and Fletch. Meghan asked Sprouse whether he has any secret about Apas so that they could use it against him the next time they meet Apa.

"Oh man, yes! Firstly you guys should do yourself the service and YouTube "young KJ Apa". There are some videos - and I won't tell you which ones exactly, because you are going to have an absolute fit when you find them - but there are videos where he is in a little baby talent show doing his thing musically."

"He also - I don't know if you guys know this - but he used to be a busker in the city that he lived in and grew up in. He used to put himself on the street corners and play guitar for money which is amazing to me."

Furthermore, he urged those guys to annoy him reminding all the words he said.