American Singer Machine Gun Kelly Dating Halsey? What About His Past Affairs? 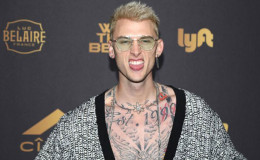 Women would surely feel so lucky to date renowned hip hop star-like Machine Gun Kelly. Not just an attractive look but he has everything that anyone can go crazy for him. The American rapper and singer was rumored to be dating singer Halsey as the two were spotted together vacationing in 2017.

Is MGK dating Halsey? Who is the mother of her child? Wanna know every detail? Let's move further!

The two were captured leaving a members-only club in Los Angeles around 2 a.m. Kelly,29, and Lovato, 27, walked out together, but steadily got into separate cars.

At the time, MGK 's Aston Martin convertible was seen following Lovato's SUV nearby the pop star's condo which caused more fuel in the media and among the fans.

The singers have already hung out in the past and were spotted together at an Emo Nite LA event back in 2017 too.

Dating rumors of Machine Gun Kelly and Halsey sparked in the media earlier in July 2018 when images of the two spending vacation together spread like a wildfire on social media. The image turned out to be from 2017 when the two were rumored of having a secret relationship.

Soon after breaking up with her former boyfriend G-Eazy, people started tweeting about Halsey's closeness with MGK but the thing couldn't last long. She fired off a set of Twitter posts and confirmed that she's single.

I’m not at the beach. I’m on tour. Alone. Slow news week I guess.

I’m not with anybody. That photo is 2 years old. Everyone mind they damn business. https://t.co/3ZttyGcd3P

While everything became pretty clear among fans, Halsey created headlines all again when MGK admitted to banging her on the radio The Breakfast Club radio show with host Charlamagne Tha God in September 2018. Charlamagne asked him if he hooked up with Halsey, MGK responded,

"Yes, many of them. I ain’t even say no names so I don’t even know why everyone’s getting sensitive."

When asked specifically if he was referring to Halsey, he said, "Absolutely!"

Settling the situation, Halsey took Twitter to call him out. He posted,

It seems Kelly is single at present without a rumor of dating and affair.

Machine Gun Kelly: His Past Relationships and Affair: Has a Daughter from His Former Girlfriend

MGK has a daughter named Casie Colson Baker born in 2008. Though the baby mama is still a mystery, some of his past affairs definitely surfaced in the media.

He dated Amber Rose in May 2015. The couple managed to be together for a short period of time duration and broke up in June 2015. The reason behind their split is still an unsolved puzzle.

Earlier in August 2013, he was spotted linking up with Rachel Starr at a Dallas nightclub. The two, however, never opened up about their relationship in mass.

sending love to all the women who keep my world spinning, that includes YOUand honestly the video of my daughter dancing at the end makes me die

Yes, it's no more a mystery that Machine Gun Kelly is no more with his daughter's mama but it's pretty clear that he has a lovely relationship with Casie. He is active on social media where he posts amazing pictures with his child and frankly expresses how precious is Casie for him.

Machine Gun Kelly aka Richard Colson Baker was born on 22 April 1990 in Houston, Texas to missionary parents. MGK and his family switched all around the world and resided abroad from Egypt to Germany and throughout the United States.

As a child, he was highly influenced by the genre of hip hop from the stars including Eminem, Ludacris, and DMX. Baker went to Shaker Heights High School. Kelly was once kicked out by his father after graduating high school as he was found working at Chipotle to afford rent.

At the very teenage, he released the mixtape "Stamp of Approval" in 2006. He released his major-label debut album, Lace Up in October 2012. Some of his hit singles include Wild Boy, Invincible, Stereo, and Hold On (Shut Up). He has an estimated net worth of about $8 million as of 2019.

Be sure to check out Marriedwiki.com for more content!!