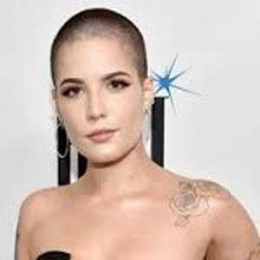 Halsey is an American singer and songwriter famous for her song "Closer" (with The Chainsmoker) which released in 2017. After receiving huge popularity from the songs, she won different awards including iHeartRadio Music Awards and Billion Music Awards. She is also rumored to be a bisexual, which is one of the controversial issues among her fans and viewers.

Ashley Nicolette Frangipane aka Halsey was born on 29th September 1994 and spent her childhood days in the city of Washington, New Jersy, U.S. She is a daughter of Chris Frangipane, a car dealership manager, and Nichole Frangipane, security in a hospital.

Her mother is Italian and Hungarian descent, and father is African-American. She has two other siblings named Sevian and Dante, and both share a strong bond with her.

Halsey was passionate about singing and started her career at the early age of 14. At that age, she was familiar with the musical instruments like violin, viola, and cello. She is also a well-trained guitar player.

She faced financial problem during her teenage, but her singing passion became a way to pay her basic needs. She did her education from a community college majoring in creative writing.

Hasely started singing career during 2012, by posting her music video on YouTube, a parody of Taylor Swift's "I Know You Were Trouble."

After her first performance in social media, she recorded a second music video called "Ghost" in SoundCloud, which gained her attention and landed an opportunity to work with Astralwerks record Lab in 2014.

In the same year, she released her debut song "Room 93". Later she launched her debut album "Badlands" in 2015 which was a huge hit. The album was sold over 97,000 copies in the first week.

One of her successful hit songs was "Closer" featuring The Chainsmoker which reached number one on the US Billboard Hot 100. For the song, she won Billboard Music Awards and iHeartRadio Music Awards.

Hasley has successfully earned huge name and fame from her career in singing and songwriting. She has an estimated net worth of $5 million.

Hasley is rumored to be dating Aston Irwin, an Australian drummer, and Machine Gun Kelly. However, both of them didn't address the rumors.

In 2014, she dated Norwegian musician and songwriter, Pedro Losnegard, popular for his stage name Lido. But the couple is no longer in a relationship.

She dated rapper G-Eazy between September 2017-July 2018. She struggled a lot in her relationship as it went on and off until it ended.

Currently, she is enjoying her life with her boyfriend and baby daddy Alev Aydin while completely focusing on her rising career. Halsey and Aydin welcomed their first child named Ender in July 2021 and made their red carpet debut in August.

However, there was a rumor about her sexual orientation. It is said that Hasley is bisexual, but she has not officially announced it.

She opened up about her endometriosis and the pain it causes at the Blossom Ball in 2018.

"Sometimes I'm bloated, I'm on an I.V., I'm sick, I'm on medicine, and I'm backstage, terrified that I'm going to bleed through my clothes in the middle of my show."

She underwent surgery in January 2017 in order to decrease pain caused by the disorder.

"I have worked way too f---ing hard to be quantified or categorized by something like that,” she said.  “Then I’m not ‘Grammy-nominated pop star,’ then I’m ‘rape survivor."

She was diagnosed with bipolar disorder when she was just 17. Not just that but she talked about her struggle to remain sober.