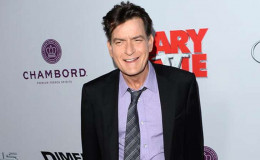 The heart-throb actor 'Charlie Sheen life is full of ups and down. He has a casanova image in Hollywood whose relationship is always in the limelight. He suffered from HIV-AIDS positive.

We all have watched the super hit CBS sitcom 'Two and a Half Men' and laughed so hard like never before. Our very own favorite character "Charlie Harper"- the Casanova and star of the series, portrayed by the famous actor Charlie Sheen.

His tremendously outstanding performance on the show never let us forgets his character. There is no doubt about his wonderful acting career but did he have the wonderful personal life too?

Well, he is known as the most controversial actor because of his married life, drugs involvement, AIDS and much more.

To find out more about your favorite actor you have to read out our article and we ensure you find it really interesting. So, let’s begin!

‘Two and a Half Men’ star actor ‘Charlie Sheen’ has a Casanova image who is very popular among girls.

He is always in news because of his relationship. He got married for three times but despite that, he has too many girlfriends. 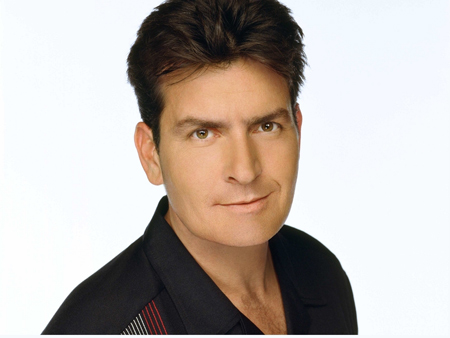 Paula Profit is reportedly the first girlfriend of Charlie Sheen whom he met during his high school days.

He never married her but with her, he has a very beautiful daughter ‘Cassandra Jade Estevez’ which was born on December 12, 1984.

Through Cassandra, Sheen has one granddaughter, ‘Luna’. 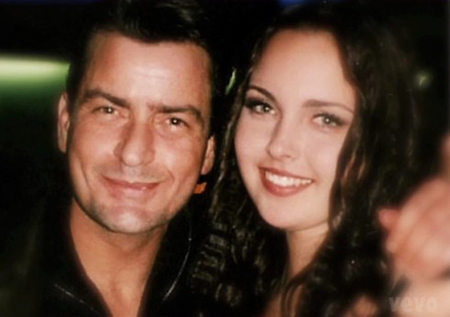 Paula prefers to a secretive personality that’s might be the reason she never opens up about her relationship with ‘Charlie Sheen’.

In 1990’s he met gorgeous actress ‘Kelly Preston’ and after that meeting duo started dating one another. In the same year, the duo announced that they are engaged. 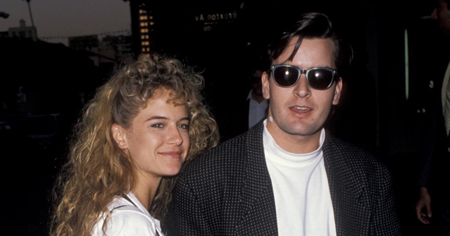 However, their engagement turned out really worst because in January 1990 Sheen accidentally shot ‘Kelly’ on her arms and she broke off her relationship with him.

After facing numbers of break up, Charlie decided to get into a serious relationship and on September 3, 1995, he exchanged a vow with ‘Donna Peele’ but this time also his relationship can’t work.

So, just after the year of marriage in 1996, they got divorced. 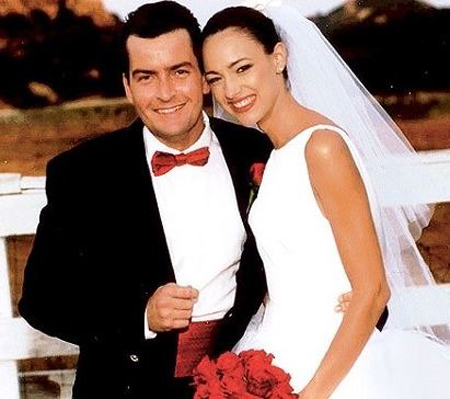 Charlie with his first wife at their wedding, Source: Daily Entertainment News

Charlie Sheen and Denise Richards first encounter at the set of ‘Good Advice’ in 2000 where both of them were cast in the movie.

At first, they referred one another as good friends but later their friendship turned into the relationship. 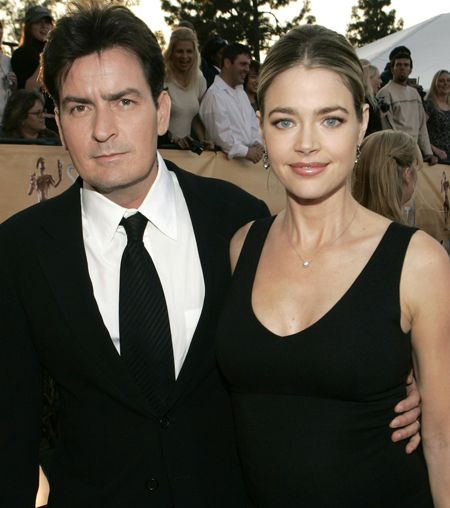 On December 26, 2011, just after the Christmas day, the couple got engaged and after a year of engagement, they tied knots at a very private ceremony.

After three years of marriage in March 2005, Denise filed divorce as she mentioned Sheen accused and threaten her as he involved in drugs.

The divorce was finalized nearly after the one and a half year of proceeds and preceded a custody dispute over their two daughters.

Brooke Mueller is the third wife of Charlie Sheen. The duo takes vows on May 30, 2008, and officially announced as the husband and wife. 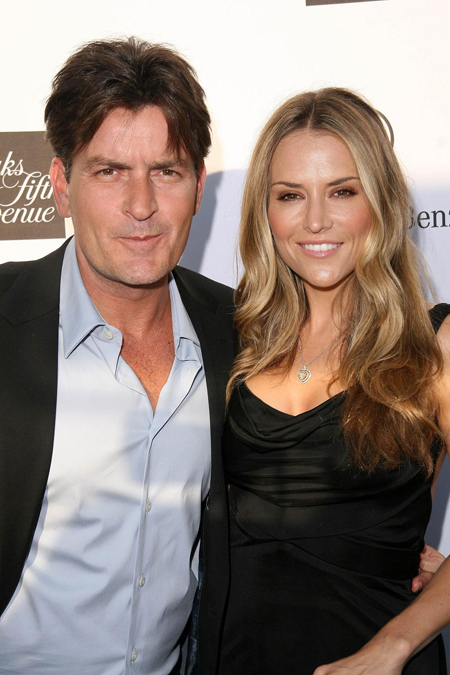 On March 15, 2009, Charlie and Brooke welcomed their twins’ sons ‘Bob’ and ‘max’. It looked like Charlie and his wife was happy with their married life but the truth was something else.

Because, in reality, they were battling with their marriage; this thing is always hidden behind the curtain unless, in November 2010, Sheen filed for a divorce.

Their divorce was one of the most controversial divorces in a history which was finalized on May 2, 2011. They battle really long for the custody of their children.

However, when court decision came out it was under the favor of Brooke Mueller.

In April 2011, Olsen left him and in same year Kenly also breaks her relationship with him and once again he was lonely.

In 2013 at an interview with ‘Piers Morgan Tonight’, he confirmed he was dating adult film actress ‘Georgia Jones’.

In February 2014, Charlie got engaged with ‘Brett Rossi’ and just after their engagement it was rumored that duo is going to marry in November.

However, in the starting of October news came out that the duo has broken off their engagement with mutual understanding. 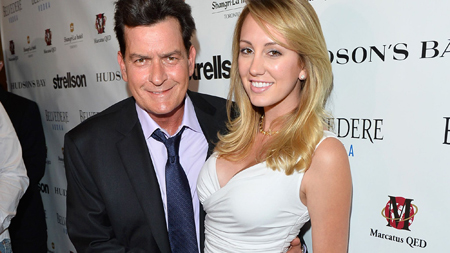 After his split with Rossi, Sheen stated, "I've decided that my children deserve my focus more than a relationship does right now. I still have a tremendous fondness for Brett and I wish her all the best.”

His involvement in Drugs

Unlike being in a relationship with too many girls, Charlie is popular for being involved in drugs too. On May 20, 1998, he was hospitalized because of the overdose of drugs.

Often, he was sent to a rehabilitation center. In a 2004 interview, Sheen admitted that the overdose was caused by injecting the cocaine.

He was even sentenced to 30 days in a drug rehab center, 30 days of probation and 36 hours of anger management.

Charlie is known as the bad boy of Hollywood. According to the source, Charlie spends £1400 daily on drugs and thousands on women.

However, now he has given up to drugs and alcohol for good. In 2015 with an interview with ABC, Sheen confirmed he was no longer addict off drugs.

“I am on a drug, it’s not available because if you try it once, you will die. Your face will melt off and your children will weep over your exploded body."

On November 17, 2015, in an exclusive interview with Matt Lauer, Sheen confirmed that he was HIV positive. “It’s a hard three letters to absorb. It’s a turning point in one’s life,” the 51-year-old actor mentioned.

He revealed that he was diagnosed since 2011 and has paid extortionists approx. $10 million dollars to keep his HIV positive secret from the world.

It was said that he has over 200 sexual partners after he learned his disease.

He admits he caught HIV after only two instances of unprotected sex. After getting about Charlie disease his ex-wife Denise expressed her worries.

Ups and Down Career of Charlie Sheen

Charlie Sheen started his acting career in 1984 with a drama named ‘Red Dawan’. After that, he appeared in many movies and drama series where his performance was appreciated by critics and viewers.

Merrily We Roll Along was fabulous. hats off to @MichaelArden, a dear friend and a 'triple-threat' if there ever was one! also, Angela Lansbury was blushing when i kissed her cheek!! #PromNight! ©

However, his performance in ‘Two and a Half Men’ provides him popularity of next level. He played the lead role on the show along with Angus T. Jones, Jon Cryer, Conchata Ferrell, Marin Hinkle and so on.

Even, he fell under the list of the highest-paid actor with $1.8 million dollars per episode.

He was in a wonderful phase of his career but because of his irresponsible behavior on the set of ‘two and a Half men, as’ he was fired from the show after its eight seasons.

He was present death in its ninth season and Charlie was not happy with this decision. He sued to the makers of the show.

After infected with HIV, Charlie felt regrets for ruining the show because of his behavior.

If we believed in a source, makers of the show were fading up with his behavior as he used drugs every time as well as his involvement with several girls.

So, they decide it was better to kill his character in the show.

Despite this, he is socially active on Twitter and we can Twitter his popularity with nearly 12 million followers.

We've had a colorful year.
at the end of the day...
we're still a family. @charliesheen #familydinner pic.twitter.com/0OnPpODEPX

Recently, Charlie Sheen is battling with his disease and needs the support from his fans in this journey of his life, we all are with him.