Home Article The 'Walking Dead' star Steven Yeun and his wife Joana Pak welcomed a child; a baby boy to this world; A big congratulation to the couple

The 'Walking Dead' star Steven Yeun and his wife Joana Pak welcomed a child; a baby boy to this world; A big congratulation to the couple 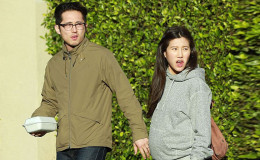 Walking dead fame star Steven Yeun and his wife Joana Pak was blessedw with a baby boy which adds more color in their baeutiful life.

The Walking dead star Steven Yeun is known for his versatile acting and his outstanding performance is always talk of the town but today we are not going to talk about his work because today's story is something different.

Well, our very own favorite star and his wife Joana Pak entered on the list of a celebrity parents as they welcomed their first child together and he is an adorable baby boy.

Steven and Joana blessed with a baby boy

Steven Yeun and his wife Joana Pak are on cloud nine right now because they were blessed with their first child.

According to the E! News, Steven's son first opened his eye on March 17.

Finally, on Friday Joana shared the first glimpse of her newborn son via Instagram and believed us it was extremely cute.

Previously on December 2016, it was notified that Steven's wife was expecting their first baby.

Later on, February 13, the star shared his wife's adorable growing baby bump picture on Instagram from the series of photo-booth shots.

Well, the couple announced their happiness of being parents but still the name of their son is yet to revealed and we hope soon Steven will disclose his little superstar name.

Steven and Joana dated one another for almost 7 years before exchanging a vow. They first encounter at the bar where Yeun worked as a bartender and Joana visited there with her friends.

Steven Yeun and Joana pak at their wedding, Source: Extra

According to the source, after that meeting, Yeun used to saw Joana every day for six months before their official date.

It was believed that their wedding was a private ceremony where 220 guests were invited including some of the Steven Walking dead costars like; Norman Reedus, Andrew Lincoln, Melissa McBride, Sarah Wayne Callies, Chandler Riggs, Emma Bell and Alanna Masterson.

Steven and Joana with their squad, Source: Daily mail

Here are some of the glimpse of their wedding and they both look elegant in a traditional Korean attire.

Getting to celebrate the love between these two, last night, along with all their friends and family was so beautiful and special!! This whole week has been an awesome, family-filled, fun time and it's been so great! (We've also gained a brother in-law from it!) #loveyouguys #pakpack

The couple is truly and madly in love with one another and there is no news of any extra maritial affair. Despite that, we have never heard any wrong gossip regarding their relationship.

At last we want to congartulate them for their new born son and hope they would be always happy in their life.