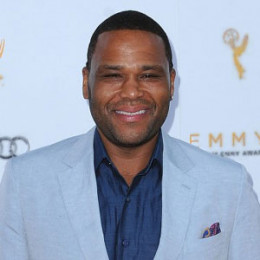 Anthony Anderson is an American actor who is better known for his role in the TV drama series All about the Andersons, The Bernie Mac Show and Blackish. He has also appeared in some of the hit movies including Transformers, Romeo Must Die, Scream 4, Me, Myself & Irene, Agent Cody Bank 2: Destination London and so on. He is the winner of two NAACP Image Awards for his outstanding act in the American sitcom, Black-ish.

Anderson was born on 15th August 1970 in Compton, California, U.S. He is the son of Doris, a telephone operator, and actress. His stepfather, Sterling Bowman, works in the steel mill industry. His ancestor migrated from Cameroon and Bioko Island (Equatorial Guinea).

He attended Hollywood High School Performing Arts Magnet’s Class of 1988. Once he has stated his first attempt at stand-up comedy was a failure. He was encouraged by Guy Torry, a fellow comedic actor and his friend who encouraged him to continue with it.

Later, he passed out his degree from Howard University where he trained with actors Avery Brooks, Ruby Dee, and Ossie Davis.

Anderson began his career as an actor from the American teen sitcom, Hang Time, created by Tory Searer, Robert Tarlow and Mark Fink, in 1996 and was aired on NBC. The TV drama show starred Reggie Theus and Dick Butkus as lead. He also appeared in American police procedural drama television series, NYPD Blue, in 1998.

The following year, he made a Hollywood appearance in three movies Liberty Height, Life and Trippin. But he was noticed by the viewers in the action movie, Romeo Must Die, where he was cast with big actors like Jet Li, DMX, Aaliyah, Delroy Lindo.

In 2007, he made an appearance in the Science fiction action movie, Transformers, directed by Michael Bay, starring Shia LaBeouf, Megan Fox, Tyrese Gibson, Josh Duhamel. The movie was one of the highest grossing movies which earned $709.7 million at the box office.

Moreover, he has given his voice in a hack and slashes action role-playing video game, Diablo III, published by Blizzard Entertainment.

Apart from movies, he has made appearances in more than 40 TV drama series but the American sitcom, Black-ish, created by Kenya Barris in 2014, rose his name and fame in the industry.

He was praised for his role by the viewers. He was awarded two NAACP Image Awards and also nominated for Primetime Emmy Awards, Golden Globe Awards, Teen Choice Awards, Screen Actors Guild Awards for outstanding performance in a Comedy series.

Anderson married his long-time girlfriend, Alvina Anderson, in September 2014. They were high school sweethearts. They are blessed with two children: a girl, Kyra Anderson and a son, Nathan Anderson.

Once there was a rumor that Anderson’s wife filed for divorce in September 2015, their wedding anniversary month citing irreconcilable difference.

All his fans were shocked and thought their marriage was over, Alvina withdrew the divorce papers. The pair made their first appearance at the SAG Awards in 2017.

He is suffering from Type 2 Diabetes and is active in diabetes awareness program. Not only this, he has played the game show, Who Wants to Be a Millionaire, for the Alzheimer’s Association and won $250 thousand in the year 2011.

Currently, he is living in his lavish house in Los Angeles, California with his family.

Anthony Anderson and Alvina Anderson are married since September 1995. The husband and wife are blessed with 2 children which complete their happy family.

Born in 1996, Kyra Anderson is the first daughter of Alvina and Anthony Anderson.

Born in 2000, Nathan Anderson is the second children of Alvina Anderson and Anthony Anderson.