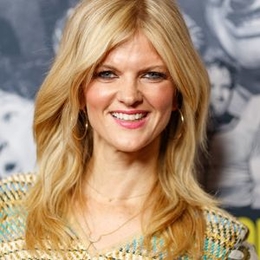 Arden Myrin is one of the names in the growing list of female comedians who are making a mark of themselves in the mostly dominant male genre. Myrin has been showing her incredible comic talents at various mediums, including movies, TV series, podcasts, tours, comedy shows for years. She is most famous as a cast member of "Mad TV" and Netflix's show "Insatiable."

Arden Myrin is happily married to Dan Martin for the past twelve years. He is a writer by profession and is most famous for writing and creating the TV series "Knights in Hyrule." 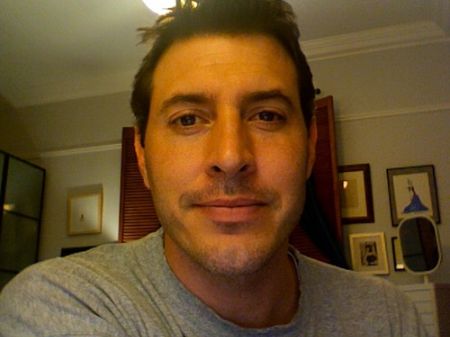 The comedian tied the knot with Dan after dating for six years. Infact they equally took a long time to go on the first date. She first met her future husband in 2001 at a Los Angeles comedy club. She was on stage doing stand-up, and Martin was in the audience.

Martin was impressed by her on their first meeting only, but he did not make any move because he thought this beautiful, talented woman must be taken. Much to his surprise, he later found out that she was single. After that, he regularly began to go to the club to see her show. Only after a month, he was able to develop courage and asked her out.

Much to Dan's amusement, Myrin accepted. She found him very attractive, so she readily went on a date. She thought since he was so tall and handsome, he must be arrogant and wrong like all the other cute guys she had dated. However, to her surprise, he was friendly and sweet, and nothing as she assumed.

The pair continued to see each other but did not rush into any commitments. Dan was previously married and divorced, so he wanted to take things slowly. On the other hand, Arden was still not believing that any man so good-looking can be so well-natured as well. It took her months to realize that he, infact is genuinely good. 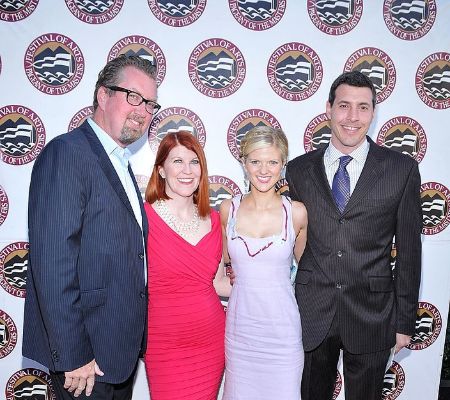 After the red hair beauty finally began to trust Dan, she knew she could spend the rest of her life with him. Nonetheless, she did not rush him to marriage. She knew his priority at the moment was to make a stable career as a writer. So, she did not want to pressure him with any other responsibilities. She knew marriage would eventually happen.

Indeed the beginning of that big day happened when Dan sold a script. After that achievement, in November 2006, the pair went on a trip to Ireland. While there, he finally proposed to her.

Arden's then-boyfriend did not pop the question in any fancy way. He just did in their hotel without any fanfare. In an interview with Boston Magazine, she recalled her proposal and stated:

“I was brushing my teeth in these awful penguin pajamas, talking about all the fun we’d had that day. And he said, ‘That’s not all that’ll happen!’ and proposed.”

The pair walked down the aisle on 30th December 2007, after a year of engagement. Arden, however, has mentioned that she did all the wedding preparations in a week, which seems impossible given what a grand event that was.

Arden Myrin Had a Destination Wedding.

Arden and her then-fiance were both born and raised on the East Coast, so they decided to tie the knot on East Coast only. They chose the Inn at the Round Barn Farm in Waitsfield, Vermont, as their wedding location.

As for the clothing, the bride chose a Monique Lhuillier dress that was layered with fluttery silk organza swatches. She furthermore enhanced her looks by electric-blue Lulu Guinness heels. Meanwhile, the groom chose a pinstripe suit from Calvin Klein. 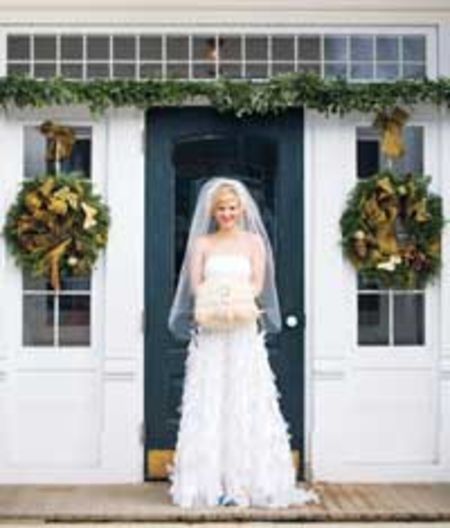 The ceremony was attended by 140 family members and friends and performed by their friend Steve Hytner who is a comedian. The first part of the festivities was exchanging vows and rings.

The comedic couple did not disappoint when it comes to vows. They added some fun statements to the promises. Dan added that

"You are the most ridiculous human being I have ever met and I am in love with you."

Similarly, Myrin responded that he was her Rock of Dan-braltar. After they were pronounced man and wife reception started. 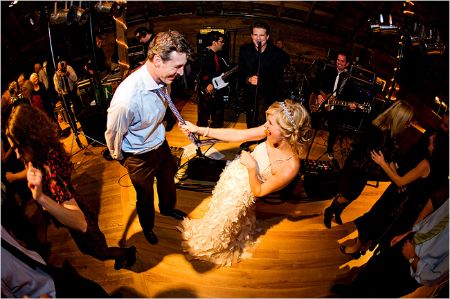 Arden Myrin and her husband, Dan Martin, on their first dance after the wedding. SOURCE: New York Times

The first dance of the newlywed was a elaborately choreographed disco number. Later in the night, singer Clare Muldaur performed a Nina Simone song. All in all, the night was a fun-filled and memorable in many aspects.

What is Arden Myrin's Secret of Happy Marriage?

Arden Myrin and her husband Dan are both in the comedy field. However, they are yet to work together on a project.

Myrin said that it is a conscious decision. They very early on their relationship decided never to mix their professional and personal life. They always support one another and help when they are creatively struck but collaborating together they never imagined. 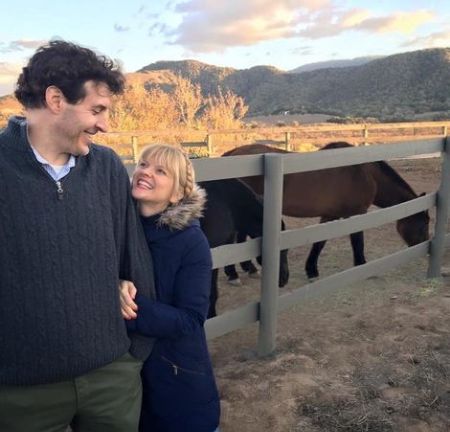 Infact Myrin believes that their rule of not mixing work and personal life is one of the reasons of their sucessful marriage. In addition to that, respecting each other's wishes have also helped them sustain their marriage.

Dan is a shy guy and likes to avoid the media as much as possible. So, Arden never talks about him on her stand-ups or put many pictures on her Instagram. She tries to give him the privacy he wants.

Do Arden Myrin Have any Children with Husband Dan Martin?

Arden and Dan are in a relationship for the past eighteen years and married for twelve years. However, they are yet to be parents. Since Arden is currently in her mid-forties, so the probability of her being a mom in the coming years is pretty less.

The couple never made public the reasons for them deciding not to have kids. Hopefully, they will talk on this topic someday.

Arden Myrin Is A Millionaire

Arden Myrin holds an overall net-worth of $1.5 million. She earned this wealth from her sucessful career as a comedian and actor.

Myrin wanted to be a good comedic actress from childhood. So, soon after graduation, she joined the Improv Olympic and started doing stand-up. 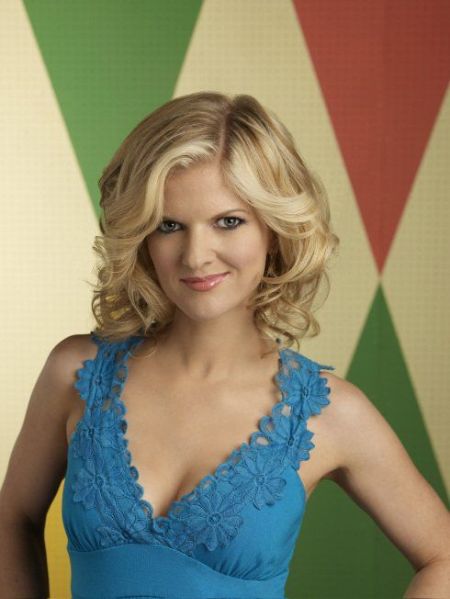 Arden Myrin is most famous for her work in the show "MADtv."  SOURCE: Pinterest

While doing comedy, Arden tried her hand in acting. In the beginning, she starred in various movies and series in minor roles. She finally got her big break when she portrayed Abby Cosgrove in the TV series "Working." After that, she never faced a lack of work and continuously acted.

The Rhode Island native is most famous for appearing in the TV show "MADtv" from 2005-2009. In the show, she portrayed various characters and worked alongside big names such as Keegan-Michael Key, Jordan Peele, Ike Barinholtz, and Bobby Lee.

Besides that, Arden is also known for her performance in shows such as "Psych," "Orange is The New Black," and "Shameless." She was last seen in Netflix's "Insatiable" in the role of Regina Sinclair. 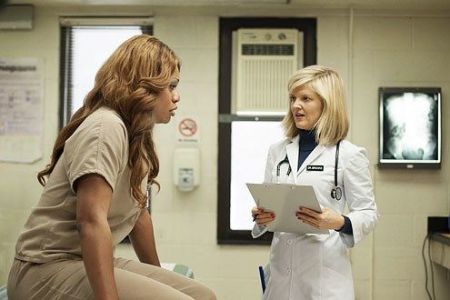 Arden Myrin has worked in many sucessful shows, including "Orange Is the New Black."  SOURCE: Pinterest

Myrin has not only showcased her incredible skills on screens but also in theatre. She is a well-regarded theatre artist with plays such as Barbecue and Boston Marriage under her credit.

Arden, though, gained sucess as a actress, she never gave up her comedic roots. She still do comedic tours across the country. She will start touring from January 12, 2020, and a ticket mostly ranges from $50-$150.

Also, Myrin has started a merchandise line. The products on her brands, on average, costs $25. 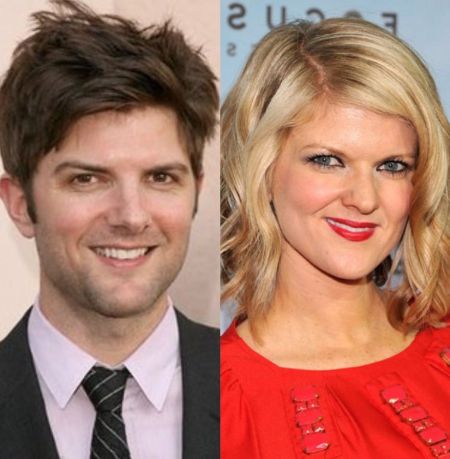 Dan Martin is a writer. He and Arden Myrin started dating in 2001. After dating for six years, the pair finally tied the knot.