Famous for portraying the role of Zoey Moreno in the TV series, Freddie, Chloe Bridges aka Chloe Suazo is one of the famous actresses in Hollywood. The star is earning an impressive net worth from her acting career.

Is Chloe Bridges Married Or Is Still Dating Her Boyfriend?

Chloe Bridges is engaged to her partner yet but is still kindling romance with her long-time boyfriend, Adam DeVine. The couple first met in 2014 on the sets of The Final Girls.

A year later, the couple started dating and since then they are inseparable. Her lover, DeVine proposed her with no engagement ring but in a simple way.

But it seems like, Bridges and her beau made their relationship official since 2015. They engaged on 25 October, 2019 showing off a dazzling diamond ring, along with a picture biting one another's lips.

The Thibodaux,Louisiana born actress and her fiance are waiting for the right time to walk down the aisle in presence of close friends and family. On top of that, the lovebirds already has plans for wedding  as well.

Early Valentine’s date night last night for the Isn’t It Romantic premiere. So happy for @andybovine @rebelwilson @priyankachopra @liamhemsworth @straussschulson the movie is so funny and charming and it’s in theaters tomorrow go see it!! @isntitromantic

The girlfriend-boyfriend couple posts several pictures together on their social media. They are often spotted attending several events together.

Previously, the actress dated American actor, Cody Linley in 2012. After dating for around two years, they finally broke up for some undisclosed reasons.

Chloe Bridges has an accumulated net worth of around $1.5million. The actress has worked in numbers of movies and TV series from where she is making a great fortune. The star has many upcoming projects from which we can see a rise in her net worth. 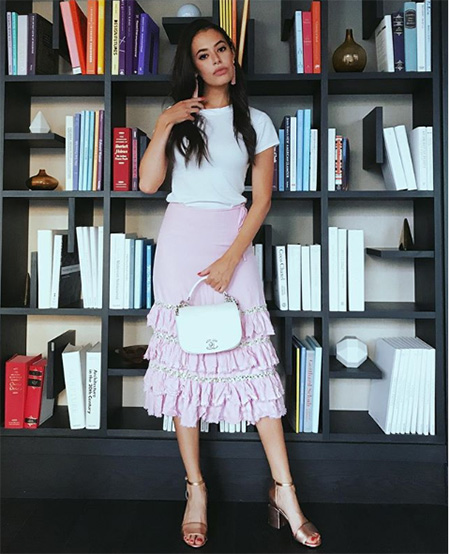 One of her 2016 movies, Mike and Dave Need Wedding Dates was made with the budget of $35million which collected around $77.1million at the box office. The movie starred Zac Efron, Aubrey Plaza, and Anna Kendrick.

The actress is involved in several charity works. Besides, some of her favorite brands include Gucci, Channel, and LV.