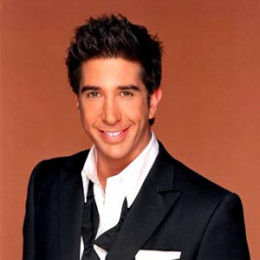 Friends fame actor, David Schwimmer is an American actor, director, and producer. He rose to fame after appearing in the NBC sitcom, Friends as Dr. Ross Geller in 1994. The series that revolved around a group of friends who lives near in Manhattan. In 2016, he starred in American Crime story as Robert Kardashian and earned Emmy nomination.

Schwimmer is active in the film industry since 1989 and till the date, he has appeared in several movies and TV series. He succeeds to establish himself as a director as well, his both directorial movies, Run Fatboy Run and Trust was critically acclaimed.

He has earned an impressive net worth from his career. He is also known as one of the highest paid TV actors since he earned millions for NBC series, Friends.

David Schwimmer is a married man, he tied the knot with British artist, Zoe Buckman. The duo is proud parents of a daughter. In April 2017, the couple announced they were  "taking some time apart".

David Schwimmer was born David Lawrence Schwimmer on November 2, 1966, in Flushing, Queens, New York City, He was born to attorneys Arthur and Arlene Coleman-Schwimmer. He is American and belongs to the White American ethnicity. Schwimmer was raised along with his elder sister, Ellie.

His family moved to Los Angeles, where he had his first acting experience. He was cast as the fairy godmother in the Jewish version of Cinderella at the age of 10. He has taken Shakespeare workshop given by actor, Ian McKellen in LA.

He then participated in the Southern California Shakespeare Festival three years in a row and succeeded to win the two prizes. Later, his family shifted to Beverly Hills following his mother's successful career as a divorce lawyer.

Schwimmer attended Beverly Hills High School where he shared that he felt an outsider. He was a good student at science and math and aimed to become a doctor. He enrolled in drama class and his drama teacher motivated him to further his acting. He flew to Chicago for a Summer acting program at Northwestern University.

After graduating from Beverly Hills in 1984, he wanted to pursue his acting career but his family insisted him to attend college first. So, he went to Northwestern University and attended a drama course at the age of 16. Schwimmer also learned theater and was in an improv group.

In 1988, he earned a Bachelor degree in theater and speech. Later he co-founded the Lookingglass Theatre Company. Subsequently, he returned back to Los Angeles to pursue his acting career.

David Schwimmer began his professional acting career in 1989 with ABC TV movie, A Deadly Silence in supporting role. Later he appeared in series like L.A. Law and The Wonder Years. In 1992, he made his feature film debut in Flight of the Intruder.  He got his first regular series role in the sitcom, Monty as the liberal son of a conservative talk show host, Henry Winkler.

In 1996, appeared as the main lead in a romantic comedy film, The Pallbearer with actress Gwyneth Paltrow. Schwimmer turned down the movie, Men in Black in 1997 because of his prior commitment.

Some of his screen credit includes Kissing a Fool, Six Days, Seven Nights, Apt Pupil,  Picking Up the Pieces,  Band of Brothers,  Uprising, Curb Your Enthusiasm.

After appearing in some serious characters, Schwimmer decided to try for comic roles and he landed the most loved character Dr. Ross Geller in NBC's sitcom, Friends. The series is about a group of six friends who live near each other in Manhattan. Schwimmer portrayed the character of a hopeless-romantic paleontologist who works at a museum and later becomes a professor at a university.

The character Ross was written by keeping Schwimmer in mind, and he was the first actor cast on the show, Executive producer Kevin S. Bright revealed it. At first, he turned down the role but accepted afterward. The series first hit the TV screen on September 22, 1994, and watched by nearly 22 million American viewers. Friends quickly earned massive popularity and audience supports.

The series ended on May 6, 2004, and lasted up to 10 seasons. The series finale was watched by around 52.5 million American viewers, making it the fifth most watched series finale in television history.

The same year, he lent voice to the character "Melman" in the computer-animated film Madagascar and the movie was a commercially successful, making it one of the biggest hits of 2005.

In May 2005, Schwimmer appeared on the London Stage in Neil LaBute's Some Girl(s) at the Gielgud Theatre. He portrayed the role of a teacher who is ready to settle down and marry but decides to visit four ex-girlfriends first.

After a year, he made his Broadway debut in Herman Wouk's two-act play The Caine Mutiny Court-Martial. He also did a cameo in the 2006 black comedy Big Nothing.

"As a director, I was struck by the challenge that I thought the script presented, which was that it was kind of three films in one. You had some great, big physical comedy, and I thought funny dialogue and characters. And then there was some real emotion to it with the relationship between the father and the son and the romance aspect".

He received  British Independent Film Award nomination in the category of Best Debut Director. Schwimmer has appeared in movies such as Nothing But the Truth, Madagascar: Escape 2 Africa and   The Iceman.

In October 2008, Schwimmer made his Off-Broadway directorial debut with  Fault Lines at the Cherry Lane Theatre in New York. He released his second directorial feature film, Trust in 2010.

In 2011, he returned to the small screen and worked in various TV series including Come Fly With Me,  American Crime Story, Feed the Beast.

His most recent venture was a series of PSAs, That's Harassment, which he co-produced with Israeli writer/director Sigal Avin.

David Schwimmer is married to British artist,  Zoë Buckman. The duo exchanged vows in June 2010 soon after their engagement at a small private family affair. Before committed as husband and wife, David and his wife were in a romantic relationship from 2007.

The couple is blessed with a daughter,  Cleo Buckman Schwimmer (born on May 8, 2011). After seven years of marriage, the pair took some time apart to evaluate their relationship. In an interview they stated,

"It is with great love, respect, and friendship that we have decided to take some time apart while we determine the future of our relationship."

"Our priority is, of course, our daughter's happiness and well being during this challenging time, and so we ask for your support and respect for our privacy as we continue to raise her together and navigate this new chapter for our family."

Prior to Zoe Buckman, Schwimmer had several relationships with prominent stars. He dated  Australian pop singer Natalie Imbruglia but due to some personal issue, they split apart after a year of relationship in 1997. Then he had a romantic relationship with Isralie actress, Mili Avital but the duo broke up in 2001.

Schwimmer was also linked with Spanish model, Carla Alapont, Gina Calavera and British singer, Tina Barrett but no official confirmation has come about it till now.

David Schwimmer is active in philanthropic activism as well, especially for women and children. He is the director of the Rape Treatment Center in Santa Monica, the organization helped date rapes and child rape victim. He also campaigned for legislation to prohibit drugs like Rohypnol and GHB.

In November 2011, Schwimmer allowed the permission to Scottish charity Children 1st to screen his directorial venture, Trust to commemorate World Day for Prevention of Child Abuse and Violence against Children.

In 2012, Schwimmer refutes two rumors: the first one was he appeared as a soldier on a train in the 1988 film, Biloxi Blues stated,

Another one was related to dancer, Lacey Schwimmer, saying,

"No, not at all. Please set the record straight. I guess it's a natural assumption because we have the same last name, but no. I've never even met her".

Schwimmer is allergic to cats. He also voted one of Playgirl Magazine's Sexiest Man Alive at No. 15.

David Schwimmer has an estimated net worth of $85 million. He is also considered as one of the highest paid TV actors as he received $1 million per episode for Friends series and made $22 million per season in 2002. IMDb rated the series with 8.9 stars out of the 10.

Schwimmer earned astonishing amount from his 10 years Friends career, the list is below,

Friends was ended almost 14 years ago but still, the star cast has made millions for doing nothing because of the syndication revenue. The series pulls in a whopping $1 billion each year for Warner Bros and 2% of its amount ($2 million) was distributed to stars every year.

Besides friends, Schwimmer has appeared in several movies which did a quite satisfying job at the box office.

Schwimmer achieved success in his directorial ventures too. In 2007, his directed movie, Run Fatboy Run earned $33.5 million at the box office made under the budget of $10 million.

In June 2006, David Schwimmer won a $400,000 defamation lawsuit against Aaron Tonken, a former charity fundraiser. Tonken claimed Schwimmer demanded Rolex watches to appeared at his charity event but he denied the allegation.

After a year, he sold his gated Hancock Park mansion for $8.865m. Schwimmer, who had owned the property in 2001 at $5.5 million scored a major profit on the sale since he originally purchased the home for $5.5 million. The actor originally listed the home in November 2011 for $10.7 million.

Schwimmer and Zoe Buckman, a British artist began dating since 2007 and married in a small private ceremony on 4th June 2010.

On 8th May 2011, Schwimmer and Buckman welcomed a daughter named Cleo Buckman Schwimmer.