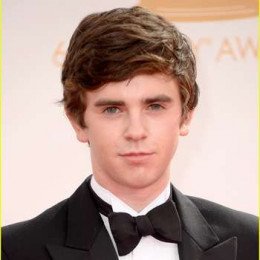 Alfred Thomas Highmore, commonly known as "Freddie Highmore", is a British actor. He is known to the public for his role in Finding Neverland and Charlie and the Chocolate Factory, for which he won the Critics' Choice Movie Award for Best Young Performer in 2004 and 2005. He made his film debut in the 1999 film, Women Talking Dirty. He is the proud son of Edward Highmore, an actor and Sue Latimer, an agent.

Freddie Highmore was born Alfred Thomas "Freddie" Highmore on February 14, 1992, in Camden Town, London. He is the eldest son of Sue Latimer, a talent agent and Edward Highmore, an actor.

Highmore was raised along with his younger brother, Bertie in Highgate, North London. He completed his primary schooling at Hampstead Garden Suburb in Hampstead. Later, he joined Highgate school, an independent school.

Highmore went Emmanuel College at the University of Cambridge and grabbed his Double First in Spanish and Arabic.

Freddi Highmore began his acting career at the age of 7 in small roles on TV. In 1999, he made his movie debut with Women Talking Dirty. Later, he has appeared in the number of movies and TV films in minor roles such as Jack and the Beanstalk: The Real Story (2001),  Five Children and It (2004),  Finding Neverland and many more.

His career skyrocketed after Highmore was signed in the musical fantasy film, Charlie and the Chocolate Factory for the main lead, Charlie Bucket. His performance was well appreciated by audiences and critics. Even, he wins  Satellite Award for Outstanding New Talent.

Besides acting and directing, Highmore lends his voice to animated series too. He voiced in the Justin and the Knights of Valour and The Canterville Ghost.

Previously he was linked up with many female stars. Highmore, dated actress, Sarah Bolger from 2006 to 2009. In 2009, he has an affair with an actress, Dakota Fanning but the couple failed to handle their relationship and split apart.

Highmore lives in his London house which keeps him grounded. He shares a good bond with his Bates Motel co-star Vera Farmiga. He is also a godfather to Farmiga son, Fynn. Highmore is Arsenal Football supporter.

Freddie Highmore has an estimated net worth of $4 million which he accumulated from his acting career and brand endorsement.

Height: He stands at a height of 5 feet 10 inches tall.