Jake Lacy is an American actor who got his breakthrough role in 2008 from series Guiding Light where he appeared in some episode. He got his share of the limelight after being cast in the role of Casey in 2010 American sitcom Better With You. Lacy is cast in the super hit 2018 movie Rampage and is set to appear in Johnny English Strikes Again which will release at the end of 2018.

Lacy is married to Lauren Deleo since 2015 till present. They married in a special ceremony on August 22, 2015, and has been living a content married life.

Jake Lacy was born on February 14, 1985, in Greenfield, Massachusetts. He was raised in Pittsford, Vermont and enrolled at Other Valley Union High School. Lacy even joined the Patricia A. Hannaford Career Center's Addison Repertory Theater pre-professional program.

He took vocational theatre classes and involved himself in some acting roles. For higher studies, he enrolled at the University of North Carolina School of the Arts located in Winston-Salem.

Lacy used to work some minor jobs after graduating from university. He did some jobs like gym receptionist and as a bar-back waiter at a club. During his jobs, he used to take time out for auditions and his hard work paid off when he got his first breakthrough role in an American sitcom Better With You playing the role of Casey.

Before entering the entertainment industry, he was involved in some theatrical performances which he did while in high school. He used to appear a lot in stage productions like in Shakespeare's play A Midsummer Night's Dream and in the Oberon Theater production tilted Much Ado About Nothing.

Prior to being cast as an important cast in Better With You, he was selected to appear in a guest role in the longest-running series named Guiding Light.

After his big debut, he went on appearing in many movies and Television series. Lacy was cast as Pete Miller for 21 episodes in 2012 series, The Office and guest starred in series, Royal Pains, The Michael J. Fox Show and Last Week Tonight. As for movies he has been involved in movies year after year giving hits like Carol, Love the Coopers, How to Be Single and 2018 movie Rampage.

He will appear in the 2018 movie Johnny English Strikes Again alongside comedy legend Rowan Atkinson and in the 2019 movie Otherhood. Lacy is cast in the series I'm Dying Up Here which originally released on June 4, 2017, and running till present.

Lacy is happily married to Lauren Deleo who was his girlfriend for many years. They married on August 22, 2015, in a private ceremony in Dorset, Vermont. Lacy is so in love with wife Deleo and is very grateful towards his wife for her immense support.

He told People magazine that his life changed beautifully since he said: " I Do". Lacy always has the good things to say about his wife. The couple doesn't have any children as of yet. 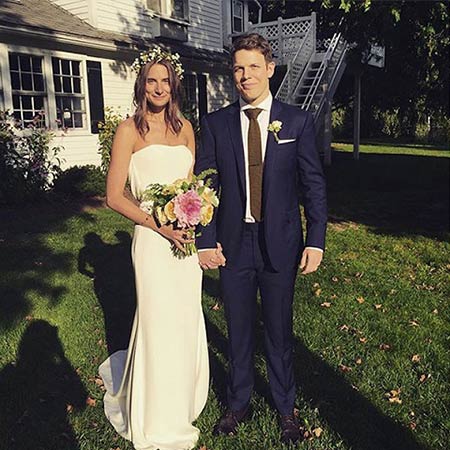 He used to love watching E.T growing up since it made him calm while he was at daycare. Lacy loves the series, Blossom. He said in an interview that he once tried to buy a car but couldn't since he had an arrest warrant filed for his traffic violation. Lacy is a fan of the show Project Runway.

Lacy describes himself as a simple guy who gets awkward over things. He defines himself as a man who is very expressive and wants to talk about everything going on around. He stands tall with a height of 5'9. Lacy owns a pet dog.

Jake revealed about going only on one proper date which was pretty formal. He felt it was disheartening as it wasn't like a normal date since they didn't kiss and parted ways casually after the date. It reminded him of his lonely life and didn't date for about six months.

Jake Lacy married Lauren Deleo in a private ceremony in Dorset, Vermont. They married on August 22, 2015.