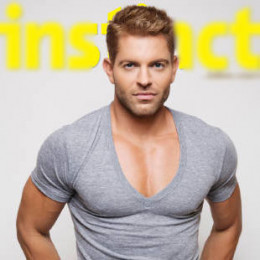 An American actor, host and a TV personality, Jaymes Vaughan is best known for his show, Celebrity Page. He debuted on TV with the show, The Amazing Race from where he grabbed much of the attention from the audiences. Apart from this, he opened up about being gay in 2011 and currently is dating his fellow actor.

Jaymes Vaughan was born on 15th April 1983 in Chesterfield County, Virginia. He is an American and belongs to White ethnicity. His parents raised him along with his sister, Reketa.

Jaymes Vaughan began his career along with his best friend, James David from the company, Chippendales in Las Vegas. The company is a touring dance troupe known for its male striptease. Both of the friends joined the reality show, The Amazing Race in 2001 leaving the company.

He shared the screen on the show along with the members Phil Keoghan, Redmond Ramos, Sara Fowler, Becca Droz, Jessica Shields, Floyd Pierce, Tara Carr and so on.

Moreover, in 2010, he also appeared in another American Talk Show, The Talk created by Sara Gilbert. A year later, he hosted Las Vegas Pride, about the LGBTQ community and their rights. Vaughan earned popularity after being the co-presenter of an American TV show, Celebrity Page along with gorgeous Sonia Isabelle in 2013.

As of 2016, he became one of the casts of film, Chocolate City: Vegas with stars Vivica A. Fox, Michael Jai, Robert Riçhard, Mekhi Phifer, Mel B, Darrin Henson, and Ginuwine.

The 36 years dashing star,  Jaymes Vaughan after doing several shows must have collected a decent sum which he has not revealed to the media and audiences. But when it comes to his co-presenter, Isabelle from the show, Celebrity Page has an estimated net worth of $40 million.

He is not much as famous as her but, might undoubtedly earn more than $1 million for sure. Keeping aside the earning, he is a fun loving guy and is fond of traveling. As per his posts on social media, he often goes to many eye-catching and expensive places. It suggests that he is living a lavish lifestyle.

Vaughan came out as gay in front of his family and friends in 2011. As of now, he is dating boyfriend, Jonathan Bennett, an American actor, and a model.

Steppin’ out to host @TeddyBearPty with the best arm candy, these two little teddy bears and my big teddy bear @jonathandbennett

The pair often posts pictures of them together in their social media. Apart from this, he was even rumored to be dating an American actress, Shalita Grant which later faded because he belongs to the LGBT community.