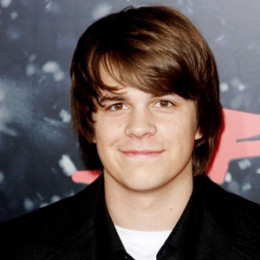 Johnny Simmons is an American actor popular for his incredible performance in the films like Scott Pilgrim vs. the World, Jennifer's Body, Evan Almighty, The Perks of Being a Wallflower, and Girlboss.

Johnny Simmons was born Johnny James Simmons on November 28, 1986. He is from Montgomery, Alabama, U.S whereas grew up in Dallas, Texas. He is of Scottish and Irish descent.

Johnny entered the film industry with the short film My Ambition in 2006. Later he landed a role in the feature comedy movie Evan Almighty in 2007. He then got an opportunity to play in an array of films including Hotel for Dogs, Scott Pilgrim vs. the World and so on. In 2011 he was seen in the comedy 21 Jump Street featuring Jonah Hill and Channing Tatum.

Afterward, Simmons went on to perform on teen drama The Perks of Being a Wallflower alongside Logan Lerman, Emma Watson, and Ezra Miller. In 2013 he made his appearance in The CW’s Blink followed by a cameo role in The music video Hold On, We’re Going Home. The same year he was cast in comedy Frank and Cindy along with Rene Russo and Oliver Platt.

The following year he starred in Discovery Channels miniseries Klondike. In 2015 he co-starred in the blockbuster The Stanford Prison Experiment. He then landed the lead role in comedy-drama The Late Bloomer in 2016. Recently in 2017, he was cast in the popular series of Netflix Girlboss.

Simmons was previously dating the famous actress Emma Watson in 2011. The duo met on the sets of The Perks of Being A Wallflower. Their relationship was a talk of the town at the time. However, Simmons soon broke up with his girlfriend after dating for several months. As of now, he is a single and career oriented man.

Johhny is a rising star who didn’t take long to gain recognition in the film industry. His current estimated net worth is $1 million.