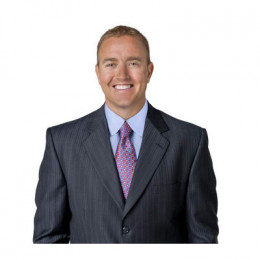 Kirk Herbstreit is a commentator for football and ESPN analyst, a television program covering college football and a commentator on college football games on ABC and ESPN. He graduated from Centerville High School. He was also a standout baseball player. When he was in high school, he was the quarterback and he achieved a notable feat when he was a senior. He was appointed the Gatorade Player of the Year, at that time.

He is said to be honest and an energetic person from the time he was in his high school. Along with the money he has earned a lot of respect from his illustrative career.

Kirk Herbstreit was born on 19 August 1969 in Centerville, Ohio to the family of Judy Herbstreit and Jim Herbstreit. His birth sign is Leo. His father was a captain of the 1960 Ohio State team and also an assistant coach at Ohio State.

He has a sister named Terri Holmes.

He completed his graduation from Centerville High School in Centerville, Ohio. He was a quarterback for the Elks and was declared the Ohio Gatorade Player of the Year as a senior. Also, he was a standout baseball player.

He completed his graduation from Ohio State University with a degree in Business Administration in 1993.

Herbstreit, 48, is known for his work on the ESPN College GameDay set with Rece Davis, Lee Corso, and Desmond Howard. It is the show that discusses the day's college football games marking the highlights and players.

He works as an analyst for ABC Sports' college football primetime series with Chris Fowler. He is also a regular contributor to ESPN The Magazine and ESPN.com. 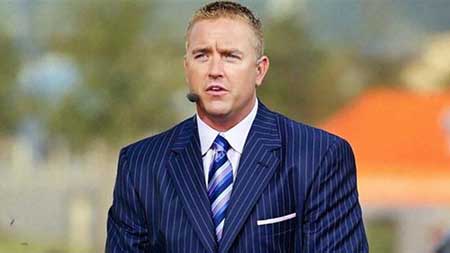 He is also a contributor to the Columbus, Ohio-based FM radio station 97.1 The Fan. He worked as a panelist for "Who's Now" with Michael Wilbon and Keyshawn Johnson.

ESPN announced that he will take the place of Jon Gruden on ESPN's coverage of the NFL draft in February 2018. It was said that he'd be joined by host Trey Wingo, NFL analyst Louis Riddick, and draft analyst Mel Kiper during the game at Cowboys Stadium in Arlington, Texas in April 2018.

Herbstreit has an estimated net worth of about $4 million with an annual salary of about $2 million at present.

Details about his property including his house, cars, and other assets are not revealed in media.

Kirk Herbstreit is a married man who married his love. The couple is happy with each other and has a pretty good understanding of each other. They have four children among which two are twins

Herbstreit met his future wife Allison Butler while studying at Ohio State. He was a good baseball and football player while Butler was a cheerleader.

Initially, they lived in Nashville, USA and later, the family of six shifted to Ohio State in 2011.

In an interview, Kirk has openly talked about his wife and how she is the main supporting pillar of the house. It may be surprising to hear but his wife is the one who approves his schedule for the day.

Moreover, she is a doting mother to their four kids and despite Kirk's workload, she keeps a close tab in the family which makes their family a perfect one,

She is a lovely and charming faced lady who have four children with her beloved husband.