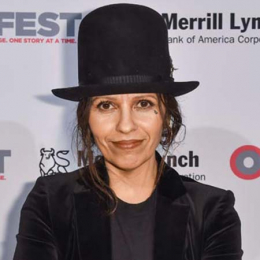 American singer-songwriter, record producer and musician Linda Perry is best known as the lead singer and primary songwriter of the band "4 Non-Blondes". She is also popular for her singles albums like 'In Flight'(1995), 'After Hours'(1999), '8 Songs About a Girl'(2011), and 'Deer Sounds'(2015). She was inducted into the Songwriters Hall of Fame in June 2015. Also, she is recognized for writing songs for the stars like Pink, Adele, Gwen Stefani, Ariana Grande, and Miley Cyrus.

Linda Perry, 54, is married to the famous actress Sara Gilbert. The duo who announced their engagement in the April of 2013 and decided to share the wedding vows on March 30, 2014, following their three years of the dating relationship. Moreover, the wedding was held with the beach theme which was attended by the pair's close friends and family. 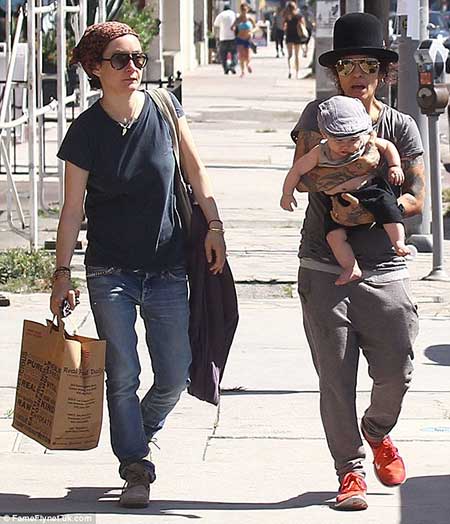 Famous record producer Linda Perry along with her spouse Sara Gilbert and their son.
SOURCE: The Daily Mail

Just after the wedding of the pair, Linda's wife Sara shared about her experience at the wedding on her Talk show,

"It definitely feels different, It feels more different than you expect. You feel like you're part of this institution and it's official, and, oh, I better not mess this up."

"You feel safer in a way and you feel like you've really committed and it's not about, can I deal with this or not deal with it. It becomes, how will we deal with our relationship together?"

Linda and Sara are both open about their sexuality and admits to being gay. They first started dating from the year 2011 and since then, they are happily living a wonderful romantic life. What's more, they recently celebrated their five years of marriage anniversary in March of 2019.

When people ask what inspires me... : @natashabedingfield

The couple is proud parents of their son Rhodes Emilio Gilbert Perry who was born on February 28, 2015. Talking about Sara's pregnancy, Perry said,

"When Sara got pregnant and we realized we were having a child...it seemed pretty appropriate."

Further, Perry is a stepmother of Gilbert's son Levi Hank born on October 2004 and one daughter Sawyer Jane born on August 2007. The two adorable kids were born from the past relationship of Gilbert with Allision Alder.

My Son, I can't believe it! pic.twitter.com/WNagaCGP33

Prior to Perry's relationship with Sara, she was dating the famous American actress Clementine Ford. The duo officially started dating from 2009 but later decided to separate on 2010 regarding their personal issues.

Linda Perry's Net Worth: Know about her Earnings, Salaries

Linda Perry holds a net worth of $18 million. She gathered her fortune from her career as a singer-songwriter, musician and record producer. In addition, the average pay for the singer is $45,000-$65,000 per annum whereas the average salary of a songwriter is $43,000 per year. Similarly, the salary of a record producer is approximately $55,000 a year.

It was a great week of writing and playing with some really talented artists. Helping people find the right sounds and words can be very rewarding. Looking forward to sharing more behind the scenes with you.

Linda started her career in 1989 after moving to San Francisco at the age of 21. At that time, she auditions for all-girl cover bands with playing guitar. After that, she started performing solo in many clubs and coffeehouses. Eventually, she composed her first professional song Down On Your Face which helped her to join the band 4 Non-Blondes in the middle of 1989.

The band released their debut album named Bigger, Better, Faster, More! on October 9, 1992, after signing the contract with Interscope Records.

It's a pretty sexy custom honda 350 don't you think?

Perry left her band to pursue a solo career and ended up giving many hit albums like In Flight(1995), After Hours(1999), 8 Songs About a Girl(2011), Deer Sounds(2015). As of her songwriting and producing career, she wrote and produced many songs for many popular artists like Pink, Christina Aguilera, Lillix, Gwen Stefani, Ariana Grande, and Miley Cyrus. 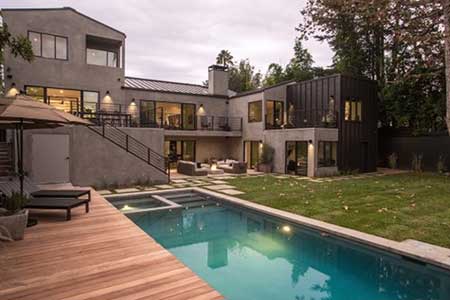 Linda Perry along with her spouse owns a house in the Historic Hancock Park. The house lies in an area of 6,127 square feet consisting of bedrooms, 6.5 bathrooms, and one outdoor swimming pool. The Los Angeles house comes at a price of $6,850,000. Besides, she is a speed lover and owns custom Honda 350 bike whereas she also used to own a Harley Davidson bike which she donated in May of 2012. 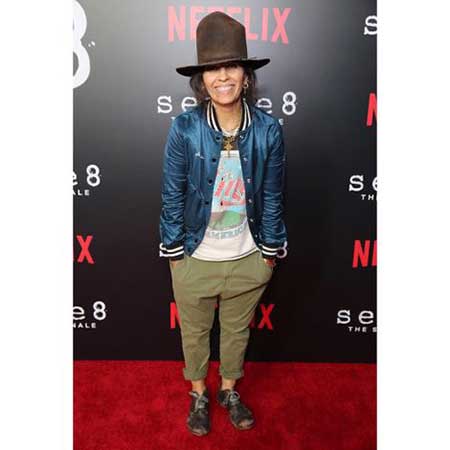 Take a look at the Interview of Linda Perry on the Larry King Now show:

Linda Perry is married to the famous actress Sara Gilbert. The duo announced their engagement in the April of 2013 and decided to share the wedding vows on March 30, 2014.

Linda and Gilbert are a proud parent of their son Rhodes Emilio Gilbert Perry who was born on February 28, 2015.