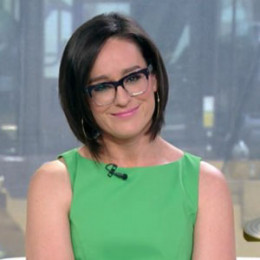 American radio and TV personality, VJ and a host, Lisa Kennedy Montogomery is currently working as a host of Kennedy on the Fox Business Network. Kennedy debuted in radio from the KROQ-FM and later made TV debut as a VJ on MTV. Occasionally, she hosts Outnumbered on the Fox News Channel.

She is married to former professional snowboarder Dave lee. The couple is blessed with two children together.

Lisa Kennedy was born Lisa Kennedy Montgomery on 8th September 1972 in Indianapolis, Indiana under the birth sign Virgo. She is American by nationality and belongs to White ethnicity.

Kennedy finished her schooling in 1990 from Lakeridge High School. Later, she earned a bachelor’s degree in Philosophy from UCLA (University of California, Los Angeles).

Lisa Kennedy began her radio career from KROQ-FM as an intern where she is known as, The Virgin Kennedy. A year later, she started her TV career from MTV as a VJ and worked there for several years.

While working in MTV, she hosted a late-night alternative rock show, Alternative Nation by helping popularize bands like Nirvana, Pearl Jam, and Soundgarden.

Merry Christmas! Blessed to do some #dungeness #crabbing in #NetartsBay w the fam & @hammerheadguide

In 1999, Kennedy appeared as a host for the show, Seattle on KQBZ ‘’The Buzz’’ 100.7 FM, a show about local issues and comedy as well. Later, she hosted many other shows including Friend or Foe?, Win Tuition and Reality Remix among others.

By 2012, Kennedy joined Fox Business Network (FBN) as a host for her program, Kennedy aired at 8 pm from Monday to Thursday. Later, she worked as a contributor to Reason.com (an American libertarian monthly magazine) and also served as a guest host for John and Ken, Bill Carroll and Tim Conway Jr. on KFI AM 640 in Los Angeles. As of now, Kennedy is working as a host for the Music in the Morning show on 98.7 FM Los Angeles Alternative Radio.

Lisa Kennedy married Dave Lee in 2000 in a private ceremony in the presence of limited guests. The media knew about the marriage only after she announced it herself.

Her husband, Lee is the former professional snowboarder and currently is a CEO of Signal Snowboards.

The couple together also has two daughters named, Pele and Lotus. The pair is happily married with no such buzz about their divorce and extramarital affairs.

Kennedy is a libertarian (simply freedom to take any movement that upholds liberty) and addressed herself as a Republitarian. She is also a supporter of same-sex marriage and war on drugs. Kennedy is a fun loving person and has a pink Republican elephant tattoo on her upper left thigh.

In 2012, Kennedy was diagnosed with celiac disease(a long-term autoimmune disorder) while she appeared on Red Eye due to which she had to change her light diet to more meat-based diet. Some of the celebs like Deborah Ann Woll, Emmy Rossum, and Jennifer Esposito have also suffered from the same disease.

Lisa Kennedy, a 46-year-old TV personality, makes a good amount from her multiple professions as a host, VJ, and presenter.

As per the records, the average salary of an employee of Fox Business Network earns a salary of $119k. Kennedy was also a VJ on MTV and as per MTV, they provided their employee a yearly salary of $35k.

Besides this, Kennedy also collected some of the money from her books named, The Kennedy Chronicles: The Golden Age of MTV Through Rose-Colored Glasses(priced $6.79 in Kindle and $11.91 in Hardcover) and Hey Ladies! And Tips for Curious Girls.

Considering all her earning, Lisa Kennedy surely holds an estimated net worth not less than a million.

In 2000, Lisa Kennedy married Dave Lee in a cozy ceremony. Lee is the former professional snowboarder and currently is a CEO of Signal Snowboards. The couple together share two adorable children.

On 1st July 2005, Lisa Kennedy and Dave Lee welcomed their first child and name her as, Pele Valentina. She is currently 12 years old and has a sibling.

Some years later the birth of their first daughter, the couple, Lisa Kennedy and Dave Lee shared their second child and named her as, Lotus.