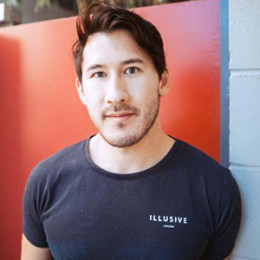 Mark Edward Fischbach is one of the famous A-listed active American Youtubers in the world who is famous as "Markiplier" among his fans. The YouTuber owns the 41st most subscribed channel on Youtube with 10.7 billion+ views. Further, he was ranked sixth in the highest paid Youtubers list in 2018 earning $17.5 million.

Markiplier's Personal Life; Is He Dating A Girlfriend?

Mark is currently dating his girlfriend, Amy Nelson who is a graphic designer from Ohio. The duo is spotted together many times and Amy is even featured in some of Mark's YouTube videos.

Headed to the Infinity War premiere!

The duo first started dating in late 2015. Soon Amy admitted to dating Mark in her Twitter account posting their picture with the caption 'Oh Jeez'. In fact, she even replied to the tweet saying 'what more do you want from us heck'. Further, the couple soon started sharing their pictures together in their respective social media accounts.

Markiplier And His Girlfriend Amy Nelson.

Fischbach first featured his girlfriend in his YouTube video 'Don't Laugh Challenge #5'. After that Mark's girlfriend again appeared in Mark's Live-Action Series with her friend Kathryn Knusten as aa official judges on the channel.

The couple is dating from 4 years but the duo hasn't decided to share the wedding vows. Mark and his girlfriend seem to be career-oriented as they are more focused on their respective works and future.

Markiplier and his sweetheart had been king everything under the radar until they first flaunt their chemistry on the red carpet event at VidCon in 2016. Both the lovebirds flaunt their affection and supports one another in their works but they aren't in a rush to walk down the aisle. Nevertheless, they have been in a live-in together relationship for years.

The lovebirds often share videos on their YouTube channel showing crazy kinds of stuff and having fun. The internet sensation and Amy has a strong love bond with no ups and downs like any other celebrity ever had.

How Much Is Markiplier's Net Worth

Markiplier is estimated to have a total net worth of $24 million as per Celebrity net worth. He is a well-known actor, voice actor, comedian, and YouTuber and has earned a good sum of money working on various projects.

Additionally, Mark is appreciated by many A-listed YouTube stars like Jacksepticeye, Logan Paul, and PewDiePie who also garnered a total of $16 million, $14.5 million and $15.5million respectively throughout their YouTube channel.

New Glasses! And a sweet new Christmas sweater that you can put on your body right now!

Hey guys! I got these smiles just for you! #SmileMeDaddy

Markiplier also owns a collection of cars and lives a lavish life as a Youtube celebrity in his house in Los Angeles. The internet sensation travels to places from time to time.

Besides enjoying huge success, the star is active in charity and fundraising with his fellow YouTubers, fans, and friends. As per Forbes, he raised $3 million for charity in past fundraising streams in 2017.

Markiplier aka Mark Edward Fischbach was born on June 28, 1989, in Honolulu, Hawaii, the U.S. with a Cancer zodiac sign. His father is a U.S. military soldier who is of German descent and his mother is of Korean descent.

He was raised along with his older brother, Thomas Jason Fischbach.

MERRY CHRISTMAS!! Chica's grump because she only got 2 more presents than Henry did...

The YouTube sensation studied in Milford High School where he enjoyed playing Trumpet in the school's marching band. Later, Mark joined the University of Cincinnati to became a biomedical engineer but later dropped his college for expanding his YouTube career.