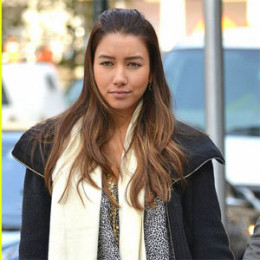 Renee Puente, an American model, and actress came to fame only after marrying her actor husband, Matthew Morrison despite her contribution in the acting industry.

Born as on 5th October 1984 in Hawaii with the birth sign Libra. Puente is an American and belongs to White ethnicity.

Regarding the career of Puente, she has done less work in the film industry regardless of which she is popular enough. In 2011, she appeared as a guest in an American comedy series The Exes alongside Donald Faison, Kristen Johnston, Wayne Knight, Kelly Stables, David Alan and others.

Moreover, she also worked in a fiction film, Divergent in 2014 with the small role along with the stars Theo James, Shailene Woodley, Miles Teller, Ansel Elgort, Zoe Kravitz, Kate Winslet and so on.

Apart from this, she was also in a girl group who were offered a recording contract by Interscope Record and also worked as a model too.

Since 2011, Puente is dating an American actor, dancer and a singer named, Matthew Morrison. The couple got engaged after two years on 28th June 2013 which he announced via Twitter with a caption:

‘’An incredible night of LOVE @ejaf Ball. I’m going to marry my best friend! Happy day for me and @Renee_Puente.’’

Furthermore, on 18th October 2014, they officially became husband and wife after they tied the knot in a ceremony in the presence of 50 guests including family and friends on the island of Maui, Hawaii.

Both the bride and groom were looking great in Gustavo Cadile gown by Emmy London and Brooks Brothers tuxedo.

Three years after their marriage, on 17th May 2017, they announced the news about expecting their first child. Some months after the report, the couple became parents on 23rd October with the birth of their son named, Revel James Makai Morrison. The couple posted pictures of their son where Morrison is fist bumping the child in one and in another picture holding the baby which were captured by the photographer, Isaac Cohen.

The couple explained their happiness writing,

‘’I'm in Revel Heaven... my heaven on earth... to give you life, to hold you in my arms, to comfort you, to feed you from my body.. I can't begin to express my immeasurable gratitude for being the one you chose as your Mama!" she wrote. "My Revel James Makai Morrison, I promise to cherish you, to constantly remind you that you are worthy of love and belonging, to teach you compassion and kindness. I will respect you and go through every moment with understanding and patience.. I promise to love you unconditionally for ever and ever my little angel baby.. my squeaks…’’

Dating from 2011, the couple finally got married on 18th October 2014 in an intimate ceremony with the presence of 50 guests on the Island of Hawaii.

After announcing the news of expecting their first child in May 2017. The couple finally, welcomed a baby boy on 23rd October 2017 and named him Revel James Makai Morrison.