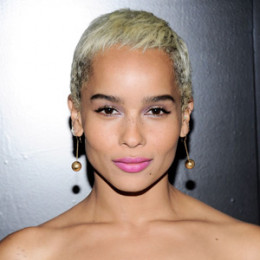 Zoe Kravitz is an American actress, model and singer popular for her appearance in the blockbuster X-Men First Class. She also played a supporting role as Bonnie Carlson in the critically acclaimed HBO series Big Little Lies.

Zoe Kravitz was born Zoe Isabella Kravitz on December 1, 1988, in Los Angeles, California, U.S. She is the daughter of actress Lisa Bonet and musician Lenny Kravitz. Her parents got divorced when she was only five after which her mother raised her along with her half-siblings, Lola Iolani Momoa and Nokoa-Wolf Manakauapo in Topanga Canyon.

She attended Miami Country Day School and Rudolf Steiner School in Manhattan. She then went to the State University of New York at Purchase.

Zoe Kravitz began her career in 2007 as a babysitter in No Reservations followed by a teenage prostitute in The Brave One. The following year she made her appearance in Jay-Z's music video I Know and sang in will.i.am’s music video We Are The Ones. Afterward, she was seen in the film Birds of America. She also co-starred in the drama The Greatest which was featured at 2009 Sundance Film Festival. The same year she starred in Yelling to the Sky alongside Gabourey Sidibe and Tim Blake Nelson. The film premiered at the Berlin International Film Festival in 2011.

Furthermore, Kravitz featured in the Showtime TV series Californication. Her breakthrough role came as Angel Salvadore in the popular Marvel Comic film X-men First Class in 2011. In addition she made her appearance in an array of movies such as Treading Water, After Earth, Divergent, Insurgent, and Allegiant, The Road Within, and Pretend We’re Kissing.

Besides that, Kravitz has also made her appearance in fashion magazines such as Elle, Venus Zine, and Jalouse. In 2009 she was named the face of Vera Wang’s Princess fragrance. She featured on the websites and in the advertisement for the brand.

In 2010 she collaborated with fashion designer Alexander Wang in a campaign. She represented Vera Wang’s new Preppy Princess fragrance in 2011. She released a jewelry line in partnership with the Swarovski crystal company. She soon became the face of the Brooklyn-based designer Alexis Bittar’s jewelry line.

Not only acting and modeling, but she is also involved in the music field. She formed the band Elevator Fight in 2009 and fronted it. The band performed at the South by Southwest music festival and on the main stage of the Roots Picnic in 2009 in Philadelphia. She was seen playing with cabaret troupe The Citizens Band. Later she formed the band Lolawolf which released an eponymous EP and debuted at the Mercury Lounge in 2013. They released their debut album entitled Calm Down in 2014.

Actress Zoe Kravitz is in a relationship with her boyfriend, Kari Glusman since October 2016. They are often spotted together and even attended the six Primetime Emmys together.

Previously, she dated several Hollywood stars. But neither of the affairs lasted long. She dated Ben Foster in 2007. Their relationship lasted for a year.

She then had an affair with Ezra Miller in 2010 followed by Penn Badgley in 2011 till 2012. She again dated singer Drake in 2013. She was in a relationship with Chris Pine in 2014 and dated George Lewis Jr. for some time.

She was a patient of anorexia and bulimia until she turned 24.

Zoe Kravitz earns a lucrative amount from her career as an actress. Her current estimated net worth is $4 million.