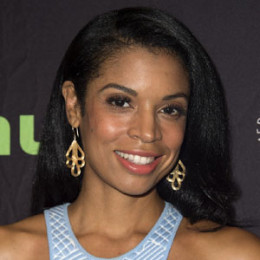 Susan Kelechi Watson is a Jamaican actress, famous for portraying the role of Janet in the American comedy-drama television series, Louie, aired on FX network. She has played several popular TV drama series including Hack, Limitless, This Is Us, The Good Wife, Law & Order and so on.

Susan Kelechi Watson was born on 11th November 1981 to Jamaican parents. Both her parents are of Jamaican heritage. Her middle name Kelechi is a Nigerian word that means Thank God.

She attended Howard University and gained a degree in Fine Arts. She also is a holder of Master of Fine Arts degree from Tisch School of the Arts Graduate Acting Program.

In 2007, she made her appearance in many tv shows like Law & Order: Trial by Jury, Medium, Kidnapped, Private Practice, Alibi and in American action police procedural television series, NCIS created by Donald P. Bellisario and Don McGill.

Though she played several roles in the TV series, her character Janet in the comedy-drama television series, Louie rose her popularity among the viewers.

Talking about Susan’s private life, there were rumors that Susan was dating her co-star, Sterling K. Brown of the show This Is Us. They have shared incredible chemistry between them on the show which led people to say they are dating.

Unfortunately, they are not dating each other, and it is just a rumor. Because Sterling is married to American actress, Ryan Michelle Bathe, and the couple is parents of two children.

Currently, she is single and is quietly focused on her career and seems that she is struggling to appear in a greater role in her near future.

Susan is one of the most versatile actresses in Hollywood who has struggled hard to reach in the place where she is now today. She has not only earned popularity among the viewers from her acting but also has received a good sum of money. Looking at her lavish style her net worth is not less than a six figure.