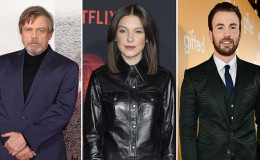 Celebrities all over have come together to support the young Tennessee boy named Keaton Jones who is the victim of bullies in his school.

The Knoxville native, out of frustration and emotional stress asked his mother, Kimberly Jones, to record a video of him, sharing his terrible experiences in his school, and why all his friends are mean to him. 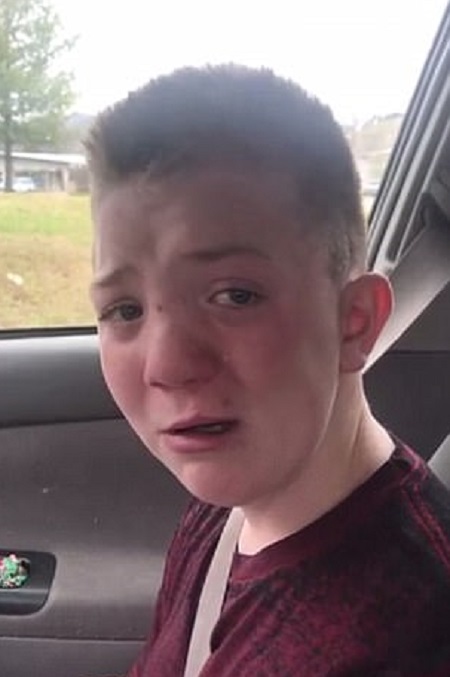 In the clip, he's seen in tears confessing that everyone calls him ugly, make fun of his nose and some have even poured milk on him. He also tells his mother,

'Just out of curiosity, why do they bully? What's the point of it? Why do you find joy in taking innocent people and finding a way to be mean to them. It's not okay.' 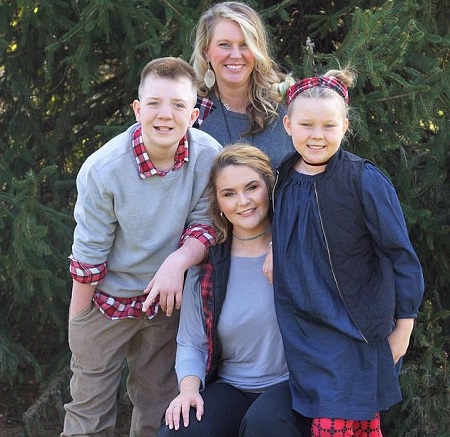 Keaton with his mother Kimberly and two sisters
Source: Facebook

His mother then asked him what he went through that day and he replied,

People that are different, don't need to be criticized about it. It's not their fault. If you are made fun of just don't let it bother you. Stay strong I guess. It's hard."

This tragic and heart-rending video went viral and people along with Hollywood stars all over came up offering messages of encouragement and moral support.

Chris Evans, the famous Captain America actor, took Twitter to speak up for Keaton's situation, telling him to Stay Strong and asking him to come to the Avengers: Infinity War premiere in Los Angeles.

Stay strong, Keaton. Don’t let them make you turn cold. I promise it gets better. While those punks at your school are deciding what kind of people they want to be in this world, how would you and your mom like to come to the Avengers premiere in LA next year? https://t.co/s1QwCQ3toi

Actor Mark Ruffalo too wrote a heartwarming message to Keaton saying "You got a pal in the Hulk."

Little buddy, I was bullied when I was a kid. You are right #ItGetsBetter! You are my own personal super hero. Protect Yo Heart. You got a pal in the Hulk. https://t.co/fRTAENcmV4

Hi @Lakyn_Jones, could you pass this message along to Keaton? pic.twitter.com/3l8P4fKAqW

Keaton, this is so accurate. Why do people do this? I think your sooo cool Keaton! I wanna be your friend ( but srsly) ur freakin awesomehttps://t.co/LD7Q762bL9

I #StandwithKeaton. Keaton baby, just know you’re not alone. There are so many people who come out of bullying so much stronger and you will be one of them!! God bless you sweetheart. https://t.co/LdCAy2lDHu

The video has now evoked the #StandWithKeaton tags all over the net and celebrities aside, sports figures have also reached out and have given full support to the young boy. Tennessee Titans tight end Delanie Walker also provided him with four tickets to their December 31 game for Keaton and his family.

Another supporter by Keaton's side is Donald Trump's son, Donald Trump Jr. and he too tweeted in support of Keaton and even offered to host him and his family at his place. 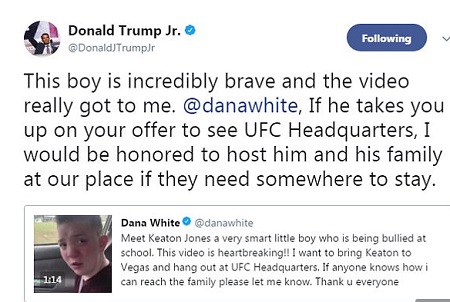 Bullying and ragging have become a rising problem among the teenagers and statistics show that over 3.2 million students are the victim of bullying each year and more than 16 million teens skip school every day because of bullying.

You can stand up against bullying by visiting StopBullying.gov to learn more about what you can do to support Keaton and other like him.