Home Article Hollywood Actor Jake Gyllenhaal Is Yet To Get Married Or He Is Secretly Tied Up With Someone?

Hollywood Actor Jake Gyllenhaal Is Yet To Get Married Or He Is Secretly Tied Up With Someone? 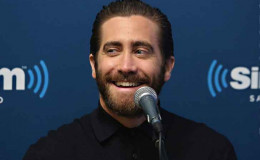 Age 37, American actor Jake Gyllenhaal is not married and is single; spotted with a chef in London named Katja Tausig but is not a couple; previously dated Taylor Swift for a few months in 2009; rumored to have dated co-star Rachel McAdams in 2014; Jake dated Reese Witherspoon in 2007 for a year; Jake was linked to Kirsten Dunst in 2002 for two years; Jake Gyllenhaal's married life, affairs, relationships, rumors, dating, girlfriends, breakups;

Soon to be seen in the upcoming flick Wildlife, the hunky American actor Jake Gyllenhaal just does not want to discuss his former flames in the industry but he avidly wants to discuss his strong desire to become a father.

Though Gyllenhaal dated many beautiful celebrities around the industry back in days, for now, the actor has been taking some time off in his romantic life. But he wants to start a family soon and who does he think can be a good mother to his children? Is he dating someone currently or is secretly married to someone? Let's take a look at his personal life.

Who Is Jake Gyllenhaal Dating Currently? Know About His Relationship!

Jake Gyllenhaal has been fabulous in Hollywood but guess what? He also wants to be a good father!

The 37-years-old hunky actor has been all secretive when it comes to his personal life. Gyllenhaal has neither been spotted with anyone nor he has talked if he is dating someone currently so we can assume that he is probably single. 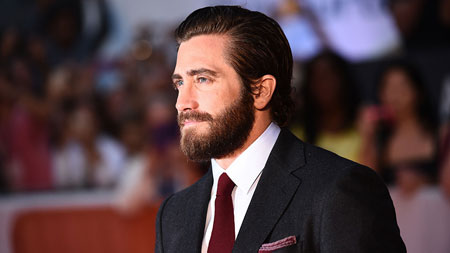 Jake is currently single but wants to start a family soon
Source: Variety

Talking about being spotted with someone, he was once seen cuddling up with Longdon-based chef Katja Tausig. Many of his fans assumed that he is dating the Tausig as she could hardly stop smiling and enjoying some moments on the street of London. 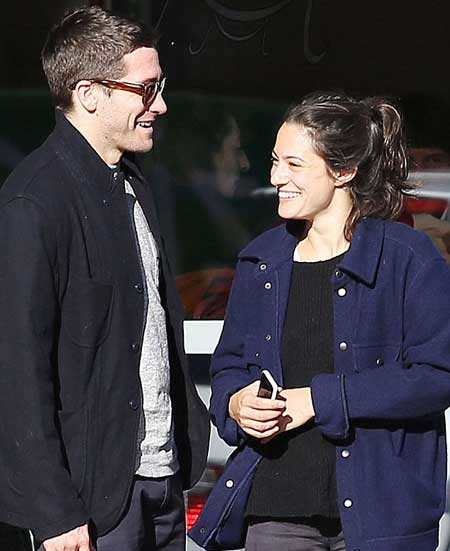 Jake and Katja spotted at the street of London sharing some wonderful time
Source: DailyMail

The Brokeback Mountain star looked happy to embrace his chef friend sharing a warm moment in the trendy Shoreditch area. But we cannot assure fully whether they were dating as they have never been spotted with each other after that time.

However, he is not just staying single for too long. In an interview with People, he mentioned that he wants a "Family of My Own". Yes, the handsome looking actor wants to be responsible and start a new family of his own.

The Oscar-nominated actor says in the interview,

“I want to continue becoming more of an adult than I already am. Hopefully with a family of my own. My sister has raised two beautiful daughters. They are the most amazing girls, It’s fun to send them home with a lot of candy because it was almost like, ‘Enjoy it, Mags!’ A little payback for being the sister who made me perform weird shows at our parents’ dinner parties.”

The End of Watch actor is also practicing his fatherhood by sending some quality time with his sister and her daughters. Looks like the actor is looking for some long-lasting relationship with someone who shares quite a bond with him and starts a family of his own.

“I’ve learned to have a real sense of humor about things. There will always be opinions. I think I’ve made my peace with that.”

Nevertheless, the actor looks happy to be living his single life and we'll sure hear the news when he finally decides to take a big step toward his life.

Broke Heart Of Taylor Swift During Their Romantic Days: Who Else Has Jake Gyllenhaal Dated? His relationship Details!

Jake has not been single forever. Yes, he has been linked with numerous women back in days.

In 2014, during the shoot of movie Southpaw, he co-starred alongside Rachel McAdams and rumors started swirling that they are dating in real life as well. Jake starred as a boxer and Rachel as his wife in the movie were spotted many times out in the public spending some quality time. 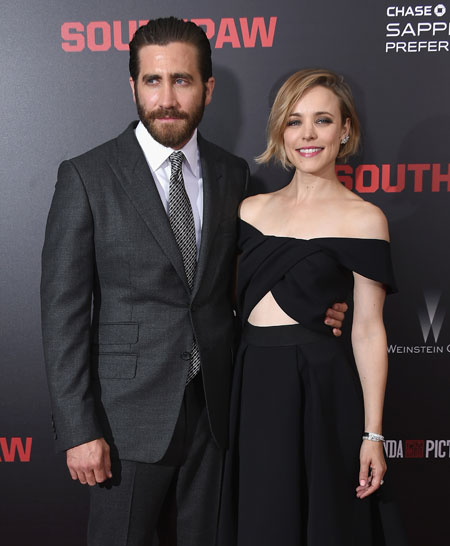 Jake and Rachel did not date but we close friends
Source: Bustle

It was obvious why some thought the two were an item at the time. After all, the two were seen everywhere including having a cozy dinner to going to boxing matches with each other and together starring a common movie, it does make some sense they would maintain a close relationship. The actor also told Marie Claire when asked about McAdams,

"She has that beautiful darkness but exudes a real, true light. To be dark and light at the same time is as rare as it is infectious."

When Gyllenhaal was asked about his affair by Ellen DeGeneres, he told her that he was single offering no additional information. McAdams also denied the rumors about her relationship and the rumored couple kept their tags to "just friends" status.

Before McAdams, he used to date actress Reese Witherspoon who co-starred in the movie Rendition in 2007 after which rumors about their romanticism started swirling as an off-screen couple.

However, the rumors appeared to be as they were spotted going on holidays and spending some quality time together in Paris in 2008. The former couple was spotted numerous time including the following month spending on Saturday strolling hand-in-hand and going for lunch. 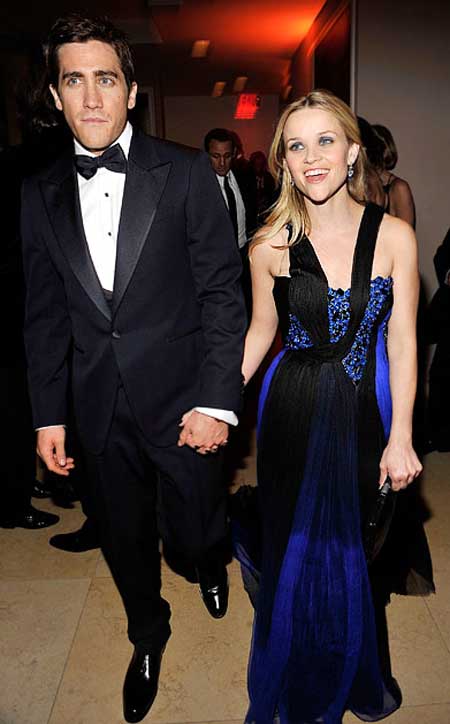 Jake and Reese dated for a year before splitting up
Source: Wordpress

Witherspoon talked to Vogue about Gyllenhaal when asked about their relationship,

“He’s very supportive. Suffice it to say, I’m very happy in life, and I’m very lucky to have a lot of really supportive people around me who care very much for me, and, you know, that’s all you can hope for in life. I am very blessed in that way.”

The couple was having some wonderful time in their lives and things were running smoothly until the tragic news for their fans came when they decided to part their ways in November of 2009.

Witherspoon is an Oscar-winning actress as Best Actress for her role in the Johnny Cash biopic Walk the Line in 2006. She was previously married to Ryan Philippe for seven years and share two children with him.

Gyllenhaal was also in a romantic relationship with the music star, Taylor Swift. The former couple dated in October 2010. Their relationship was going pretty judging by their constant appearance together in numerous places.

The former couple was in an on-and-off relationship for a few months when finally they decided to end their relationship just before the holidays in 2010. Some sources also reported that they reunited in January of 2011 having an intense run-in at the Oscars in late February. 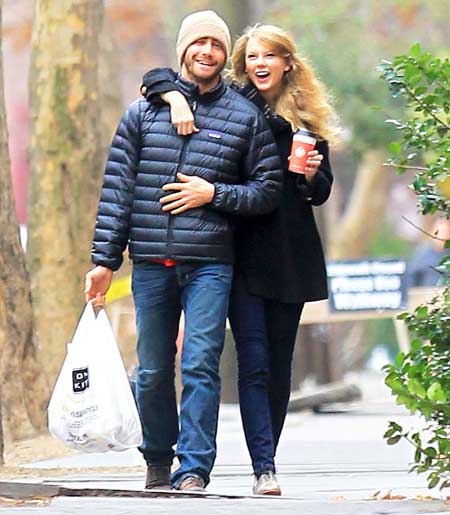 Jake and Taylor dated for a few months but their relationship did not last too long
Source: USWeekly

Their on-and-off relationship damaged Swift from inside, a source reported stating,

"She's haunted by that relationship. He totally screwed with her mind. She doesn't know how to meet anybody new."

Some also say that the break in their relationship is also due to the age gap which created some unmatching term as Gyllenhaal is 9 years older than her.

Swift later stated in an interview about their breakup,

"I think once a relationship is done it's done, you can't do that back and forth thing — it's the most exhausting process. I think you have to have somebody that's dependable, that isn't going to change their mind every five seconds."

Well, the couple moved on with their lives after a period of time.

The list does not just end here, Jake was also romantically involved with Kirsten Dunst back in days. They were introduced in 2002 by Gyllenhaal's sister Maggie Gyllenhaal and hit it off right then.

The couple started dating in 2002 just when the Spiderman came out and they were one of the hottest Hollywood couples at the time. But after dating for two straight years, their breakup news came out of nowhere and wanna know what really happened between the couple? 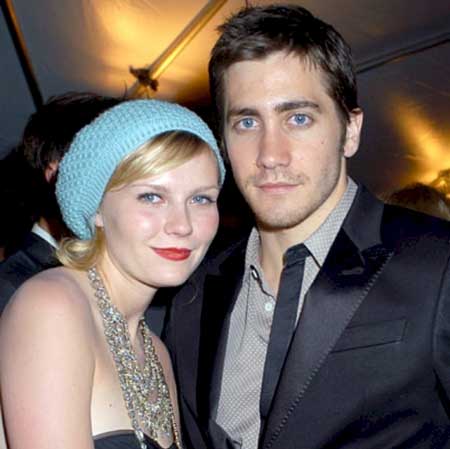 Jake and Kirsten dated for two years in 2002
Source: Diply

The beautiful actress Kirsten talked in an interview about their relationship mentioning Jake and her were never going to last. She also mentioned that they were wrong for each other from the very beginning.

The couple was a wild one in the Hollywood but the story behind their relationship is whole other thing. Kirsten stated that he never wanted to go out for dates and stay at home. She even said that they used to have sex in the public bathrooms, cars, and even by the sea.

Her mother also referred to him as a "terrible" person and couldn't handle seeing her daughter anywhere near him adding he was "a complete snob".

Certainly, that pretty much proved the reason behind their split. 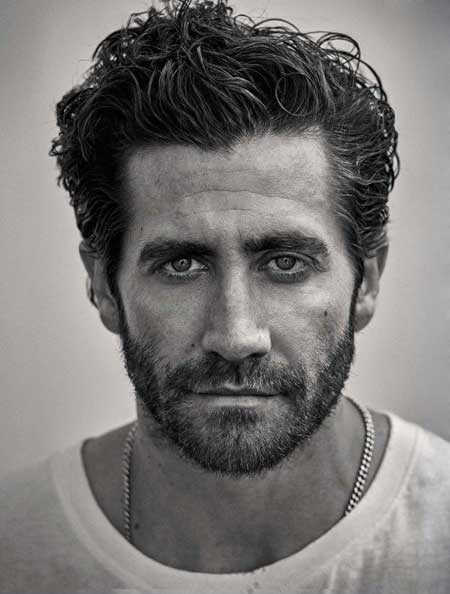