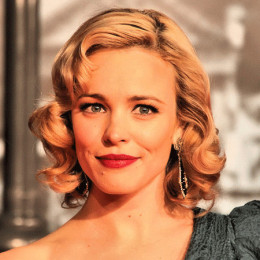 The Canadian star is currently dating Jamie Linden and is pregnant with her first child. She resides in Harbord Village, Toronto.

Rachel McAdams possesses the net worth of $16 million at present. She is the recipient of Gemini Award and several MTV Movie Awards.

McAdams was born on November 17, 1978, in London, Ontario, Canada. She is Canadian and is of mixed (English, Irish, Scottish, Welsh) ethnicity. She is the daughter of Sandra McAdams and Lance McAdams. Her father was a truck driver and her mother was a nurse.

McAdams started figure skating at the age of four and received an opportunity for pair skating training in Toronto when she was nine years old. She has won many regional awards competing in skating until the age of 18.

McAdams studied at Myrtle Street Public School and later went to Central Elgin Collegiate Institute. She was not interested in study in her early days, as she used to avoid school pretending to be sick. She was active in sports and has played volleyball, badminton, and soccer.

McAdams was a member of the Peer Helping Team and served on the student council. She has also participated in the Crimestoppers program at the time. She worked at McDonald's for three years during the summer holidays.

McAdams developed an interest in performing at the age of seven but was not supported by her parents. She attended Disney and Shakespeare summer camps during her childhood days. She participated in Original Kids Theater Company, London productions at the age of twelve.

McAdams showed active involvement in school stage productions. She has won a performance award at the Sears Ontario Drama Festival. She got inspiration from her English teacher and Drama teacher in the eleventh and twelfth grades respectively.

McAdams studied Cultural Studies at the University of Western Ontario. She went to York University’s four-year theater program in 1997. She graduated from the University in 2001, with Bachelor of Fine Arts degree. She worked with the Toronto-based Necessary Angel Theater Company at the time.

McAdams debuted her career in 2001. She appeared as Beth Swanson in the MTV pilot Shotgun Love Dolls that was filmed during the spring break from York University. She also played in Canadian film, My Name is Tanino that year.

McAdams received Genie Award nomination for her performance in the drama Perfect Pie. She made her Hollywood debut alongside Rob Schneider and Anna Faris in the 2001 comedy, The Hot Chick. The movie was a big hit and made a good collection at the box office. She received two Gemini Award nominations for her work and won one of them.

In 2004, McAdams made a breakthrough performance starring in the comedy movie, Mean Girls. She was cast opposite Lindsay Lohan, Lacey Chabert, and Amanda Seyfried, among others. She won MTV Movie Awards for her performance in the movie. The film was ranked #12 on the list of the Greatest Ever High School Movie by Entertainment Weekly.

The same year, McAdams starred opposite Ryan Gosling in the romantic drama The Notebook. The film is based on Nicholas Sparks’ novel of the same name. She was cast alongside James Gamer, Gena Rowlands, and Sam Shepard, among others. She gained an MTV Movie Award and four Teen Choice Awards for her performance.

McAdams appeared alongside Owen Wilson, Vince Vaughn, and Bradley Cooper in the 2005 romantic comedy, Wedding Crashers. The movie became one of her successful hits grossing $285 million at the box office.

The same year, McAdams was cast opposite Cillian Murphy in an American psychological thriller, Red Eye. Also, she starred alongside Sarah Jessica Parker and Diane Keaton in the seasonal family comedy, The Family Stone that year.

McAdams co-starred alongside Benedict Cumberbatch in Marvel’s superhero film Doctor Strange in 2016. The movie was the greatest hits of her career grossing 677.7 million at the box office.

Rachel McAdams’ net worth is $16 million at present. She has done many successful movies in her career. She earned $1 million from the movie, Red Eye in 2005.

McAdams currently resides in Harbord Village, Toronto, Canada. She is unmarried to date. She is in a relationship with her boyfriend, Jamie Linden. The couple has been dating since 2016, as per the online sources.

McAdams’ boyfriend Jamie Linden is a professional screenwriter and director who has written a number of hit movies over the years. She is pregnant with her first child with her boyfriend. The couple is not married.