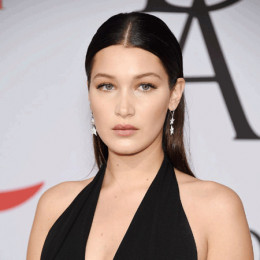 Bella Hadid is a popular American Supermodel who is represented by IMG. She is the daughter of Yolanda Foster and Mohamed Hadid. Both of her parents are stars of TV series The Real Housewives. She has two siblings and she is the middle child between Gigi Hadid and Anwar Hadid. From very young age she was fascinated in modelling. When shew as just 3 years old she competed in equestria. Later to pursue her career in modelling, she moved to New York. She is very close friend with popular model Kendall Jenner. Beside modelling she has part-time job at an organic smoothie bar located in Malibu.

Exploring her personal life, she has not married yet. Currently, she is in a relationship with her singer boyfriend. She has already brought her relationship in public and the couple frequently spends their leisure time together.

Yesterday at @brandonmaxwell I am so proud to be a part of your vision and even more proud to be your friend. Thank you for being everything that you are to us and treating us all as family ! I can truly say we all love you so much!!!! Thank you B, @georgecortina @johndavidpfeiffer @tompecheux @bobrecine

According to her, she is very much enthusiastic to represent the United States at the 2016 Olympics. Despite a very young age, she already launched a clothing line called Robert Riley's featuring clothes like jeans.

Also Read: Gigi Hadid And Bella Hadid Pose Naked Together For Vogue: ''I Will Do Anything For Her,'' Says Gigi

In 2015, she dated Canadian singer The Weeknd. They broke up because of their busy schedules in November 2016. They got back together in 2018.

Hadid's net worth is estimated to be $12 million as of 2019. Many models earn well in the modelling industry as fellow model Hilary Rhoda bags a net worth of more than $2 million.

Isabella Khair Hadid was born on 9 October 1996 in Washington, D.C. to Yolanda Hadid and Mohamed Hadid.

She belongs of Dutch and Palestinian descent. She has two siblings, an elder sister Gigi Hadid and a brother named Anwar Hadid. She has two half-sisters, Alana and Marielle.

In 2012, she along with her mother and brother with chronic Lyme disease.