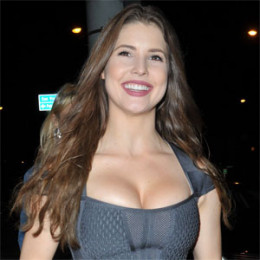 An American fitness professional, television personality, and model who is better known as the founder of Play Foundation. She has got a strong online presence on both YouTube and Vine. She has already got more than 4 million followers in her vine account. She was also former Playboy Playmate of the Month of October in 2011. She has also featured on the cover of Health & Wellness magazine.

Amanda Cerny is currently dating Vegan fitness model and athlete Johannes Bartl. They first met in 2016 and fell in love. The couple confirmed their relationship in 2017.

Cerny and her partner have been kindling romance for three years now from February 23, 2017. Either of the pair hasn't been rumored of being separated or intimately close to the third party. Celebrating Valentine's Day 2019, she shared an image with her boyfriend via Instagram post:

Previously she dated fellow Viner King Bach in 2015. They were once the hottest internet couple, but their romance didn't last long. However, they still seem to be good friends. She also linked up with Logan Paul.

Cerny also dated the pop sensation, Justin Bieber and later was linked to Dane Cook. While they were a pair, they were often spotted together.

Amanda has a massive number of followers on Instagram as of 2018 she was followed by 22 million people. She is a founder of the Play Foundation in Haiti. She also supports ChangUr, a foundation that raised money for kids in need.

How Much Is Amanda Cerny's Net Worth?

Amanda now is known as a social media star, a model, and a T.V personality. She started as a model and featured in Playboy as a playmate in October 2011 edition.

She then featured in many editions of Playboy and was also named one of the Sports Illustrated Lovely Ladies of the day. Cerny was also a cover model for Health and Wellness magazine.

She has collaborated with social stars like King Bach, Juanpa Zurita and Logan Paul for her videos. Besides being a social media star, Amanda has also made appearances on TV shows.

She played a recurring role on Adam Devine's House Party for Comedy Central. She also was a guest star on HBO's Hello Ladies and The Late Late Show with James Cordon. She has appeared on the big screen featuring in the movie The Bet. Cerny also played in music videos of artists like DJ Chuckie, Dillion Francis, and Eli Roth.

Most recently, Amanda is working on comedy-podcast "OHoney" with Sommer Ray, an American Instagram star. She's involved in this project since December 2019.

Amanda Cerny was born on June 26, 1991, in Pittsburg, Pennsylvania, the U.S. to American parents but raised in Florida. She later moved to Los Angeles with her parents to chase career. She was born under the sun sign Cancer.

Amanda has a two siblings, sister Samantha and brother Nick Bateman. She studied at Florida State University. She has a sister named Samantha.