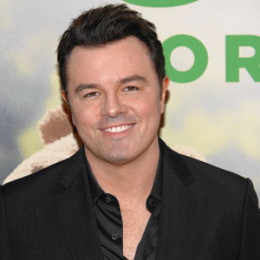 Seth Woodbury MacFarlane, better known as Seth Macfarlane, is an American actor. He is also a filmmaker, comedian, and singer. He is known for his work in creating the animated sitcoms, Family Guy, American Dad! And The Cleveland Show. He has made his guest appearance in different series including Gilmore Girls, The War at Home and FlashForward. He has received three Primetime Emmy Awards and an Annie Award for his great work in Family Guy. Being the part of the music industry, he has been nominated for four Grammy Awards for his musical work.

Seth Macfarlane was born on 26th October 1973, Kent Connecticut, the U.S. to Ronald Milton MacFarlane and Ann Perry. He grew up with his sister, Rachael Ann MacFarlane, who is a voice actress.

From childhood, he was interested in illustration and began drawing cartoon character Fred Flintstone and Woody Woodpecker. At the age of nine, he began publishing a comic strip called Walter Crouton for The Kent Good Times Dispatch, a local newspaper.

He earned a diploma from Kent School in 1991. Later, he went to study film, video, and animation at the Rhode Island School of Design (RISD) and completed his bachelor degree in Fine Arts. When he was studying there, he wanted to be the part of Disney but changed his mind after graduation.

During his time in RISD, he used to participate in an acting competition where he used to do stand-up comedy. During the final year at RSID, he created a thesis film The Life of Larry, which become the inspiration for Family Guy. His professor submitted his film to the animated studio Hanna-Barbera and started working for them.

Seth started his career as an animator and writer for Hanna-Barbera Cartoons. There he got a chance to work and experience a lot of things. There he met the actor and voice-over artists such as Adam West and Jack Sheldon of Schoolhouse Rock! fame.

There he worked on four television series during his tenure at the studio: Dexter’s Laboratory, Cow and Chicken, I Am Weasel and Johnny Bravo. He did freelance work for World Disney Television Animation writing for Jungle Cubs, Nelvana and Ace Ventura: Pet Detective. He also created a sequel to the Life of Larry entitled Larry & Steve in 1996.

During his time in Hanna-Barbera, he was introduced to Leslie Kolins and Mike Darnell, head of the alternative comedy department at Fox.

After the success of King of the Hill, in 1997, Seth made a deal to made a second pitch for the series and was provided a budget of $50,000 to produce a pilot that could lead to a series. After six months, he presented Family Guy to Fox and was appreciated for his work.

The agreement made him the world highest paid television writer and raised his popularity among the viewers. Later, he worked on successful adult animated series American Dad!, The Cleveland Show, Cavalcade of Cartoon Comedy and The Orville.

Great book, and an awesome cast to be a part of - can’t wait

After that, he ventured in the directing field and his first directorial movie was Ted, in 2012. The movie starred Mark Wahlberg and Mia Kunis. The movie grossed $549.4 million through the world and was listed in the 12th highest-grossing movie of 2012. It's sequel Ted 2 was released in 2015.

His next movie was American western comedy movie, A Million Ways to Die in the West, in 2014. He acted, directed and produced the movie which starred Charlize Theron, Amanda Seyfried, Neil Patrick Harris, Sarah Silverman, Liam Neeson and so on.

Seth is a multi-talented person who has the talent of singing as well. He signed a record deal with Universal Republic Records and released his debut studio album, Music Is Better Than Words on 27th September 2011. His album was nominated for the Best Traditional Pop Vocal Album category at the 54th Grammy Awards and received a score of 52 out of 100 on Metacritic’s compilation.

Following his music career, he released his album Holiday for Swing in 2013, No One Ever Tells You in 2015 and recently he announced his fourth album, In Full Swing, will release, on 15th September 2017.

Moreover, he has made guest appearances on series such as Gilmore Girls, The War at Home and FlashForward and also, he has his own YouTube series titled Seth MacFarlane’s Cavalcade of Cartoon Comedy.

Though Macfarlane's "We Saw Your Boobs" song at the 2013 Academy Awards is definitely a shocking moment in Oscar history, he mentioned that he was asked to host the Oscars again.

Sources reported that the Academy Awards is still struggling to find a replacement of former Oscar host Kevin Hart for the year 2019.

Seth was in a love relationship with Emilia Clark, since 2012. The couple dated for almost six months and ended their relationship in 2013 because of their busy schedule and distance relationship. Though the couple broke up, they are still good friends.

According to the sources, in February 2017, he was spotted with a gorgeous lady outside of Italian restaurant Nerano, waiting for a car in Los Angeles. He probably is dating the lady but Seth has kept details about his alleged girlfriend a secret for now.

Seth is a supporter of the Democratic Party and has donated over $200k to various Democratic congressional committees and to the 2008 presidential campaign of then U.S. Senator Barack Obama. Also, he has stated that he supports the legalization of cannabis and has served on the board of director of Peoples for the American Way, a progressive advocacy organization.

His luck favored him when he missed his 7:45 a.m. American Airlines Flight 11 that got hijacked soon after the departure on 11th September 2001. At 8:46 a.m. the plane was flown into the North Tower of the World Trade Centre, which killed everyone on board.

Back in February 2018, Macfarlane was spotted going out for a dinner with actress Halston Sage, 20 years his junior.

Rumors about their dating and affair circulated in media since September 2017.

Seth Macfarlane's Net Worth; Details About His Salary and Earnings

Seth is one of the versatile actors of Hollywood industry. He has successfully collected an estimated net worth of $250 million as of Celebrity net worthwhile it is about $194 million as per the Richest. His sources of income include acting, directing, voice acting, singing and from YouTube channel.

Currently, he is living a lavish lifestyle in the Beverly Hills Villa and the property's valuation is around $14 million. He is passionate about cars and has got a sports car manufactured by Delorean.