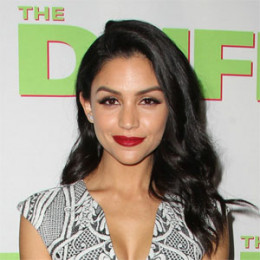 American actress, Bianca Santos is popularly known for her roles in the TV series, The Fosters and MTV series, Happyland. In 2013, Santos made Hollywood debut from the movie, Brodowski & Company. The gorgeous actress is currently single, but she was once rumored of dating her co-star of The Fosters.

Bianca Santos was born Bianca Alexa Santos was born on July 26, 1990. She is American and belongs to the mixed ethnicity. Her father, Carlos Santos, is a Brazilian from Rio de Janeiro while her mother, Carmen Carnot, is a Cuban from Havana.

Santos studied at the California Lutheran University. She majored in psychology and minored sociology. She fluently speaks Spanish and Portuguese.

Bianca Santos made her Hollywood debut in 2013. She cast as Anna in the TV film, Brodowski & Company that year. The following year, she appeared in the movies such as Bitter Strippers and Channing.

Santos joined the cast of the Freeform TV series, The Foster in 2013. She portrayed the role of Lexi Rivera in the series. The series is currently running its fifth season that first aired on July 11, 2017. The following year, she starred in the MTV comedy series, Happyland as Lucy Velez.

Santos portrayed Isabelle in an American supernatural horror movie, Ouija in 2014. She was cast alongside Olivia Cooke, Daren Kagasoff, Douglas Smith, and Shelley Hennig, among others. The movie was one of her successful movies grossing $103.6 million at the box office.

The following year, she portrayed Lucy Velez in the TV series, Happyland.

Santos appeared as Casey Cordero in the 2015 movie, The DUFF. She starred alongside Mae Whitman, Robbie Amell, Bella Thorne, and Skyler Samuels, among others. The movie grossed $43.5 million at the box office.

In 2017, Santos played in a coming-of-age romantic comedy movie, SPF-18. The movie was released on iTunes on September 29, 2017. It was released on Netflix on October 29, 2017. She shared the screen with Carson Meyer, Noah Cetineo, Keanu Reeves, Molly Ringwald, and Pamela Anderson, among others.

Santos is active on social networking sites such as Instagram and Twitter. She prefers to visit different places as seen on Instagram. She shares a good bonding with her brother, Tiago Santos.

Bianca Santos, the gorgeous actress is very confidential when it comes to her relationship and dating life. So, far she has done an excellent job keeping her love life away from the public.

Santos is possibly single at the moment but previously she was linked up with her co-star from the series, The Fosters, Jake T. Austin. She was rumored to be in a relationship with Jake after they shared a kiss scene onscreen.

Later, she clarified the rumors and stated,

"Oh my goodness! I get asked that a lot. It's one thing if you're kissing your crush... It's totally different when you're working with someone and it's professional. Jake is such a sweetheart. We work so well together, but I don't kiss and tell!"

Austin left the show in 2013 and their dating rumors also ended with his departure from the show. However, her fans loved their chemistry.

Bianca Santos, 27, has the height of 5 feet 5 inches (1.65). Santos is a beautiful actress, popularly known for her roles in the TV series, The Fosters. She has an estimated net worth of $1 million as per some online sources.

Here the list of her movies that made a good collection at the box office include: