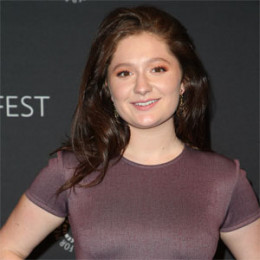 Emma Kenney, an American actress, is currently working on the series, Shameless, and Roseanne. Kennedy made her acting debut in the movie, The New Girl In Town. Among all her works, she is best known for her role as Debbie in Shameless. The young actress is currently single.

Emma Kenney was born Emma Rose Kenney on 14th September 1999 in Manhattan, New York under the birth sign Virgo. Kenney is American as per nationality, and as far her ethnicity is concerned, she is White. Her mother, Gillian is an attorney and father, Kevin Kenney is a sports writer.

From the very early age of 5, Kenney started acting with her best friend, Ciera Gill, as they both had interest in improvisation. She then appeared in advertisements for Scholastic Books and did many other commercials as well as voice over roles.

Emma Kenney’s manager discovered her at the age of eight. By 2008, she had appeared in two short movies, Lyre Liar and Bittersweet. In 2009, she directed a short film named, The New Girl In Town and it reached the finals at the New Jersey International Festival.

The same year, 2009, Kenney debuted on TV from Green Apples by Stephen Scott Scarpulla. Later, she appeared in many movies and TV series like A (Not So) the Civil Union, Three Little Puppets, Day Camp and Broadwalk Empire among others.

However, Kenney is most famous for her role Debbie Gallagher in the TV series, Shameless where she appeared alongside Emmy Rossum, William H. Macy, Jeremy Allen White, Cameron Monaghan, Shanola Hampton, Ethan Cutkosy and Emma Greenwell among others.

Kenney is currently working on the series, Roseanne with stars Roseanne Barr, John Goodman, Sara Gilbert, Laurie Metcalf and Lecy Goranson among other. On 27th March 2018, the series’ new season is set to premiere.

Emma Kenney, a young and talented actress, is apparently more into making career than ''making boyfriends and being engaged in relationships.''

Kenney says she is ''dating her career''.  She once tweeted about her single life saying,

‘’ Dinner with the boyfriend aka Bobs Big Boy...my life is sad hahaha #foreveralone.’’

In a 2014 interview with Vulture, she disclosed that she has a crush on Dylan O’Brien, Harry Styles, Jeremy Allen White and Ansel Elgort. She also shared her taste in music and said Lorde, Lana Del Ray, Eminem, One Direction and Panic At The Disco were her favorite artists.

Kenney is a fun loving girl and loves to party and visit places with her friends. Despite being single in real life, Kenney's character, Debbie Gallagher became a mom at an early age from her boyfriend in reel life.

Emma Kenney, 18, stands at the height of 5 feet 7 inches (1.7m). Kenney, who began her career working in commercials has an impressive net worth of $1 million. However, the given amount isn't the official figure.

As per TMZ, Kenney earned $12k per episode during the first season of Shameless. So, as per calculation, she made an average of $144k in the first season, appearing in 12 episodes.

By season 2 and 3, her pay increased by 4%, making $12.5k and $13k per episode respectively. Her salary is undoubtedly more now as she has worked for almost all the seasons until today.

She also gave her voice in the movie Epic made with a budget of $93 million that collected $268.4 million at the box office. She has bought a house which she revealed via Twitter saying,

The young actress is living a lavish lifestyle with her earnings.

Check out the interview of Shamless fame actress, Emma Kenney with Hollywood TV,