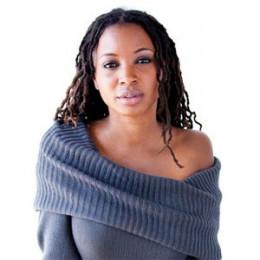 Screen Actors Guild Award winner, Shanola Hampton, is an American actress best known for the series, Shameless for her character as Veronica Fisher. She began her career from the series and then moved to the movies. Despite a busy schedule, she manages personal life along with her professional life.

Regarding Hampton’s private life, Shanola Hampton is married to her long-term boyfriend, Daren Dukes. The couple walked down the aisle in March 2000 in the presence of friends and family members.

Followed by the romantic affair of several months, the pair took their lovey-dovey relationship to the next level. Today it’s been one year and ten months they are still together. Hampton and Dukes are living sound life without any rumors of extramarital affairs and divorce.

Some sources claimed, her husband is a writer and an actor known for some of his movies including The Hanged Man, The Marriage Tour, Hot and Bothered and others.

They have two children, Cai MyAnna and Daren O.C Dukes. Being a successful actress, she is also a good mother and a caring wife. Currently, the family of four resides in their house located in Los Angeles, California.

What is Shanola Hampton's Net Worth?

The 5 feet 2 inches tall actress possesses an estimated net worth of  $1 million as of February 2020. She till today has appeared in numerous series and movies from which she is drawing a decent income. Some of her highest-grossing movies include Things Never Said, The Mostly Unfabulous Social Life of Ethan Green, and You Again.

Moreover, she also appeared as a model in the video game, Left 4 Dead 2. Apart from that she even announced that she would be opening a Performing Arts School which can be counted as her source of income.

The movie You Again earned a box office collection of $32 million. Further, he co-stars from Shameless Emmy Rossum and William H. Macy earned around $350,000 per episode which has been increased now. Hampton also maybe gets paid around that figure.

Moreover, after a year she began to appear in films as well. Notoriety was her first short movie. She gained recognition from an American comedy film, You Again by Andy Fickman starring Kristen Bell, Jamie Lee Curtis, Betty White.

She then appeared in the series, Shameless where she shared the screen with the stars Emmy Rossum, William H. Macy, Jeremy Allen White, Cameron Monaghan, Emma Kenney and so on. She is a cast member since 2010, and it is one of her most praised work.

Shanola Hampton was born on 27th May 1977 in Summerville, South California. She is an American and belongs to African American ethnicity. She earned a degree in Theatre from Winthrop University and also holds a Master's degree in Fine Arts in Acting from the University of Illinois. During childhood, she used to sing in the church as her father was a pastor.

On 11th March 2000, Shanola Hampton married an actor plus a writer, Daren Dukes. Today it's been 17 years that they are together with no buzz about their divorce and extramarital affairs.

On 20th January 2014, Shanola Hampton and Daren Dukes welcomed their first child, Cia MyAnna Dukes some years after their marriage. She is now 3 years old.