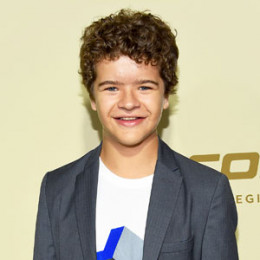 Screen Actors Guild Awards winner, inspiring child actor, Gaten Matarazzo is popularly known for his role in the Netflix’s series, Stranger Things. Matarazzo who debuted in acting in 2015 from TV series, The Blacklist, is now one of the famous names getting paid a good sum for his work.

In 2015, he debuted on TV from the crime thriller TV series, The Blacklist. appearing alongside James Spader, Megan Boone, Ryan Eggold and Harry Lennix among others.

Matarazzo also has a band, Work in Progress.

Gaten Matarazzo has an estimated net worth of $4 million. Matarazzo earns between $20k-$30k from the Netflix series, Stranger Things.

Matarazzo is trying to raise awareness of cleidocranial dysostosis utilizing his fame. He is also raising funds for CCD Smiles (an organization helps cover costs of oral surgeries for those suffering from the same disease) through the sales of his T-shirt lines and from various events. As of now, he along with his sister is raising fund for the organization via their Facebook account.

Gaten Matarazzo yet to involve in a romantic relationship. He is single and is focused on building his career.

Matarazzo is left-handed and loves to dance and sing. He is also close to his entire casts of Stranger Things.

He is active on social media and has a good fan following. As of January 2019, he has over 8.9 million followers on Instagram and over 1.26 million on Twitter.

Matarazzo used to travel to New York City for his Broadway performances.

Matarazzo has cleidocranial dysostosis, or cleidocranial dysplasia, a congenital disability that affects the teeth and bones. He also mentioned disease in the Stranger Things. He also opened up about his condition on The Jonathan Ross Show to spread awareness about the illness saying,

‘’It affects your facial growth, your skull growth… it affects your teeth… that’s why I don’t have any, these are fake, right here. I have teeth but I mean, they’re all baby teeth.’’

‘’I have a really mild case, and a lot of people have it much worse than I do. And I feel like putting it in the show is really raising awareness for it.’’

He also posted a picture on his Instagram with the caption,

‘’Just letting you guys know. These are fake teeth.’’

Matarazzo underwent two surgeries and four extractions. He also explained that because his baby teeth did not fall properly, it hampered his adult teeth from growing. He also mentioned that due to his disease he was bullied and did not get any roles despite giving many auditions.