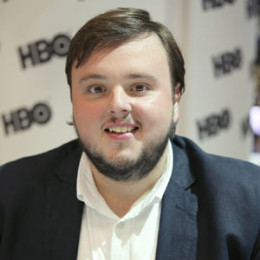 John Bradley is famous for his role in the HBO hit series "Game of Thrones". In 2014, he was also nominated for the Screen Actors Guild Award for Outstanding Performance by an Ensemble in a Drama Series for Game of Thrones. Besides, he has appeared in Borghia, Shameless, and Merlyn.

John Bradley-West, known as John Bradley is an English actor born on February 24, 1988, in Wythenshawe district of Manchester. He grew up along with his elder sister, who is 13-years older than him.

Next, he played in the HBO fantasy TV series Game of Thrones by David Benioff, D.B. Weiss, as Samwell Tarly, who is the friend of Kit Harington's character, Jon Snow. The other cast includes Emilia Clarke, Peter Dinklage, Kit Harington, Rose Leslie, Lena Headey, Kristian Nairn and so on.  One of the reviewers called him "a wonderful comedic and cowardly yin to Jon's door yang".

The 29 years old John Bradley is not married yet. He has been in rumors, dating his co-star Hannah Murray, who is Bradley's on-screen match. He and his alleged girlfriend Hannah were seen attending severals events together, but they are yet to open about their relationship. For now, it can be assumed that he is single.

John Bradley is earning a good amount of salary as one of the actors in the hit series Games of Thrones. Each episode of the Game of Thrones now costs $10 million to produce. As the main cast are earning $2 million each per episode. So, we can assume that John is also earning a big salary. As of 2017, John Bradley net worth is estimated to be around $1 million.