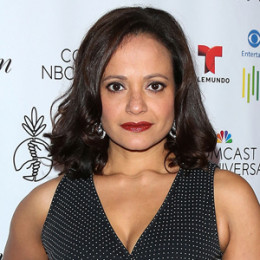 American actress, Judy Reyes is best known for her roles in the TV series and movies like Scrubs, Devious, and Claws. Reyes made her Hollywood debut in 1992 with the TV series, Law & Order. She also starred in various other movies and series including Street Justice, The Circle, One Day At A Time and Blue Bloods among others. Apart from this, Reyes is currently in a relationship with her longtime boyfriend with whom she shared an adorable daughter.

Judy Reyes was born on 5th November 1967 in The Bronx, New York under the birth sign Scorpio. Reyes is American as per nationality, and as far as her ethnicity is concerned, she is of mixed race.

Reyes was born to Dominican immigrants. Her parents raised her with her three sisters including her twin sister, Joselin Reyes in Bainbridge Avenue.

Reyes graduated from Hunter College in Manhattan. She began acting right from the college days. She also performed in the Labyrinth Theater Company.

Judy Reyes made her Hollywood debut in 1992 in the series, Law & Order. Reyes appeared in the series alongside Sam Waterson, S. Epatha Merkerson, Jerry Orbach, Dann Florek, and Steven Hill among others. In the same year, she debuted in a movie, Jack and His Friends in a role of Rosie.

Reyes then appeared in numbers of movies and TV series like- Street Justice, No Exit, Lena’s Dream, Cosby, Nothing Sacred, Bringing Out the Dead, 100 Center Street, Third Watch, Dirty, Castle, Devious Maids and iZombie among others.

Judy Reyes, a famous actress from Hollywood, is currently dating her longtime boyfriend, George Valencia. Valencia is a director and writer. The couple started dating from 2008 and is still together living a blissful life.

Soon after their relationship, Reyes announced her pregnancy in 2009. In November 2009, they welcomed their first child and named her as, Lelia Rey Valencia. The couple has been together for ten years but is not married. They have not revealed anything regarding their future marriage plannings.

Before this, Reyes was married to, Edwin M. Figueroa, a cinematographer. The pair exchanged vows in 1997 in an intimate ceremony with the presence of only limited guests including their families, close friends, and relatives. The relationship did not last long, as they divorced in 2008. After several speculations, Reyes cited irreconcilable differences as the reason for their separation.

Judy Reyes, now 50, has the height of 5 feet 4 inches (1.63m). The stunning diva, Reyes who appeared in the movie Claws has an estimated net worth of $6 million which she earned from her acting career.

In 1997, Judy Reyes was married to her first husband, Edwin M. Figueroa in a cozy ceremony. Almost after a decade, the couple divorced due to their irreconcilable differences.

A year after Judy Reyes and George Valencia's relationship, the couple welcomed their first child on 27th November 2009 and named her as, Lelia Rey Valencia. She is currently eight years old and appeared in almost every post of Reye on Instagram.