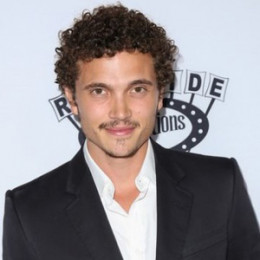 Karl Glusman is an American actor, famous for his role Gasper Noe in the controversial drama Love. He also appeared in the Neon Demon and Tom Ford’s nocturnal Animals. Apart from movies, he has played few short movies like Blow Up and Summer House. Also, he has made an appearance in the television series, Gypsy. Currently, he is in a love relationship with X-Men: First Class actress Zoe Kravitz.

Karl Glusman was born in 1988 in The Bronx, New York. When he was of six months, the family moved to Oregon and raised him in the Portland area. He belongs to German Jewish and Irish Catholic descent.

He went to Lake Oswego High School and then attended Portland State University. After a year, he dropped out of the University to join acting course at the Portland Actors Conservatory. To be an actor, he later attended the William Esper Studio in New York.

Glusman made his acting debut from The Iconographer in a short role of Young thug in 2008. Then after four years in 2012, he was cast in two short movies including Blow-Up and Summer House.

In 2015, he made his appearance in the Branden Kramer’s directed American found footage drama thriller and horror movie, Ratter. The movie starred Ashley Benson and Matt McGorry, premiered on 24th January 2015.

That year he was also seen in the American drama movie Where Pride Began directed by Roland Emmerich opposite Jeremy Irvine, Johhny Beauchamp, Joe King, Matt Craven and Ron Perlman.

After playing several roles in the movie, he acted in the Gasper Noe’s written and directed French romantic drama movie, Love. He shared the screen with Klara Kristin and Aomi Mayock. The movie was released in 3D at the 2015 Cannes Film Festival.

The movie premiere set a record for the festival completely selling out all 2,200 seats in the Palais des Festivals et des Congres in under six minutes with over 600 people trying to gain entrance to the projection which resulted in physical altercations.

Apart from acting, he has given his voice in the in the Japanese-American 2012 computer animated military science fiction movie, Starship Troopers: Invasion. Moreover, he is also seen in the television drama series Gypsy created by Lisa Rubin. His next upcoming thriller movie is Above Suspicion directed by Phillip Noyce which starred Emilia Clarke, Jack Huston, Thora Birch and Johnny Knoxville.

Karl Glusman is dating his girlfriend, Zoe Kravitz, since October 2016. The lovebirds recently celebrated their first anniversary and looked perfect together in a picture shared by Kravitz on her Instagram account.

The couple was last spotted together in the six Primetime Emmys, where he wore a black suit whereas Zoe was seen wearing a colorful dress on the red carpet.

Karl Glusman is one of the rising stars of Hollywood industry. His source of income includes acting and voice acting. Though his net worth is not yet published in the media, his lavish lifestyle suggests that he probably has a net worth not less than a million. He shares his girlfriend’s Zoe Kravitz net worth of $4 million.