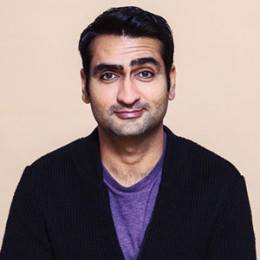 Kumail Nanjiani is a stand-up comedian and actor better known for his recurring role in the TNT television series Franklin & Bash. He is also a producer and known for his work in the movie The Big Sick, Silicon Valley, and Central Intelligence. Besides acting, he has hosted the shows including The Meltdown with Jonah and Kumail and podcasts: The Indoor Kids and The X-Files. The successful actor is married to his wife Emily V. Gordon since 2007.

Kumail Ninjiani was born on 21st February 1978, Karachi, Pakistan to Pakistani parents. He was raised as a Shia Muslim, and later he became nonreligious. He is Pakistani-American with Asian ethnicity.

He attended Karachi Grammar School, Karachi but later, he moved to the United States and did his higher education from Grinnell College in Lowa and passed out with a degree in Computer Science and Philosophy, in 2001.

Kumail began his career as an actor from the television sketch comedy, Saturday Night Live, in 2008. The following year, he made his appearance on The Colbert Report, Michael & Michael Have Issues, Ugly Americans, Traffic Light, CollegeHumor Originals and so on.

He then appeared in Greg Berlanti’s directed American romantic comedy-drama movie, Life as We Know It, in 2010. The movie starred Katherine Heigl, Josh Duhamel, Jos Lucas, Christina Hendricks and so on. It collected $105 million at the Box office.

He also appeared regularly on Dan Harmon’s podcast, Hammonton. There he portrayed the character of Chris de Burgh in the fantasy tabletop role-playing game, Dungeons & Dragons.

Then he guest-starred on HBO’s political satire comedy television series, Veep which starred Julia Louis-Dreyfus and played a recurring role of Amir LaRussa, Newsreaders, in 2013. Later, he appeared in Burning Love, Drunk History, and Ghost Ghirls.

In 2015, he appeared in several roles in movies including Hot Tube Time Machine 2, Addicted to Fresno, Hello, My Name Is Doris, Hell and Back and Goosebumps. He then appeared in science-fiction drama television series, The X-Files of Chris Carter which starred David Duchovny, Gillian Anderson, and Mitch Pileggi.

After playing several roles in the movies, he played a lead role in role in the American romantic comedy film, The Big Sick, directed by Michael Showalter, in 2017 opposite Zoe Kazan, Holly Hunter, Ray Romano, and so on. Also, Kumail and his wife, Emily worked as a co-writer in the movie. It became the second highest-grossing independent film of 2017.

Apart from hosting and acting, he has given his voice in movie, TV series and Video game characters. He voiced Reggie in The Walking Dead: Season Two, Fight Haver in Fight Haver (Fast Drive), Jarun Tann in Mass Effect: Andromeda and The Agonizer in Middle-earth: Shadow of War.

Kumail and Emily V. Gordon, an author, comedy producer and former couple and family therapist, are husband and wife since 2007. The couple dated several years until they decided to tie the knot.

After nearly a decade, the lovebirds still share a strong bond. They are yet to feel the happiness of having children.

Kumail has struggled to get success in the Hollywood industry, and his hard work has paid off as he has an estimated net worth of $2 million.

Emily is an author, comedy producer and podcast host. She is best known for co-writing the 2017 romantic movie The Big Sick.