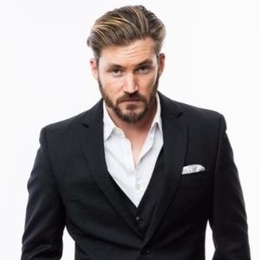 Landon Beard is a talented artist who has shown his skills in singing in acting. He is the lead singer of the band 'Harbor Party' and actor of film such as "Generation Um..." He, however, is best known in the media because of his relationship with American actress Vanessa Ray.

Actress Vanessa Ray won the heart of millions of fans all around the world with her fantastic acting skills. But there is only one guy in this world who was able to take the breath away from this blonde beauty. Well, if you are guessing who is that lucky man is, it is none other than her husband, Landon Beard. 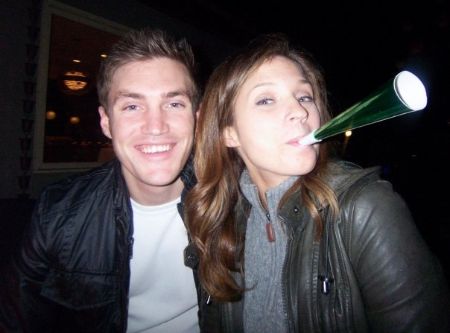 Beard, 40, and Ray, 38, tied the knot in 2015 after dating for six years. Though it is not clear how the romance blossomed between these two individuals, there is no doubt they found each other during their loneliest time. 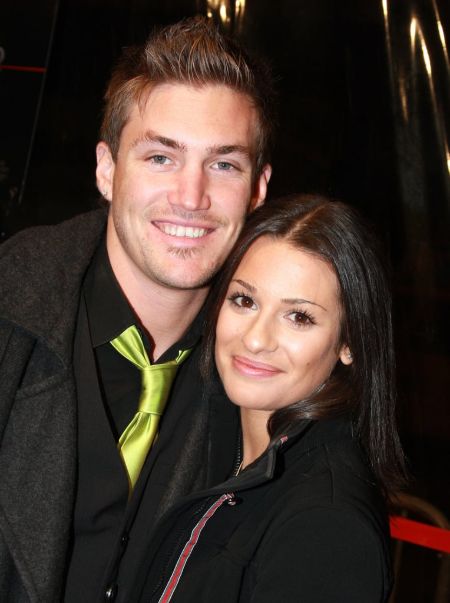 In 2009, when Vanessa and Beard started dating, the actress was recovering from her divorce with her first husband, Derek James Baynham. Similarly, Beard was also in the process of overcoming his break-up with girlfriend Lea Michele. Beard and the "Glee" star were together from August 2006 to June 2008.

Since both the musician had already gone through failed relationship previously, thus they took their time before moving into any life-long commitment. After six years of dating, Beard finally decided to propose. Let say; it was worth the wait as Landon asked the question in a grand way. 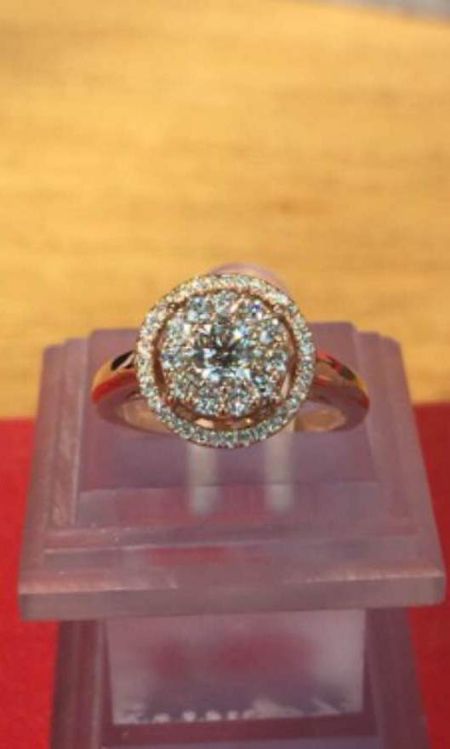 First, the San Diego native bought a pink gold sparkly engagement ring custom designed by Jeano Georgiano on the advice of actress Jillian Bell. After that, he flew Ray's best friend and actress Kelly Sullivan from LA to New York so that she could witness the proposal firsthand and also capture the whole moment.

Then on January 23, 2015, the day of their engagement Landon faced the challenge to convince his future fiance Ray to go for a walk to their favorite spot in New York. It was freezing cold thus, Ray was in no mood to go to Pier 84 on the Hudson River. Thankfully after much cajoling, she agreed. 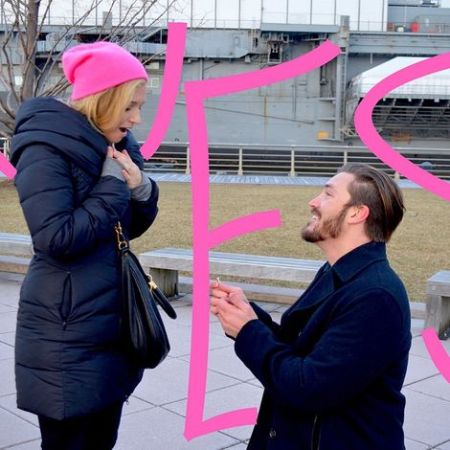 After reaching the spot, Beard went down on his knees and pulled the ring. Ray was taken aback, but after some crying and million questions, she said Yes. In other words, Landon's meticulous planning and hard work paid off.

Beard though planned a elaborate proposal with microplanning; however, when it came for the wedding, the couple went for a relaxed event with a eclectic, boho feel. The lovebirds tied the knot on June 14, 2015, at the Condor's Nest Ranch in Pala, California, in a star-studded event. Celebrities such as Sasha Pieterse, Kim Matula, and Kelly Sullivan were in attendance. 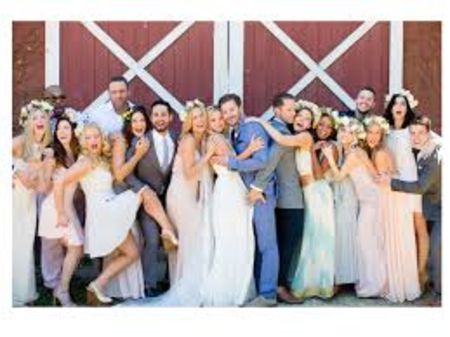 Landon Beard and Vanessa Ray invited close friends and family to their wedding. SOURCE: The Knot

After the couple exchanged vows in a ceremony that was officiated by both fathers of the bride and groom, a reception was held. For that, the guests lounged near teepees on Mexican-style blankets wearing flower crowns while eating tacos and drinking wine. In addition to that, they enjoyed music from Landon's band Harbor Party and singer Craig Pilo. 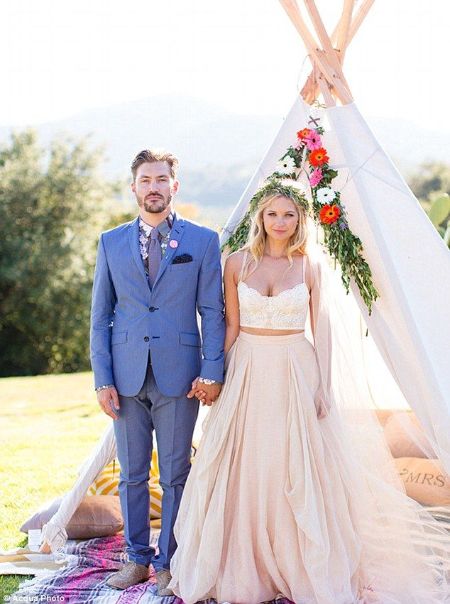 Not only were the festivities cool and relaxed but the outfits of the pair were also boho-nature. Beard wore a Dolce & Gabbana shirt, blue pantsuit, and sentimental 1981 tie from his father. On the other hand, his bride selected two dresses for the occasion. First, an ivory dress with spaghetti straps and a long lace-edged veil. For the second one, she opted for a blush-hued crop top with delicate lace and a full A-line skirt. Shareen and Carol Hannah designed both dresses.

More than four years have passed since Beard walked down the aisle with the "Blue Blood" actress. But the relationship between them is still going strong. The couple is still head over heel for one another and do not hesitate to show affection for one another in social media. Furthermore, they are yet to be involved in any cheating rumors or scandals. 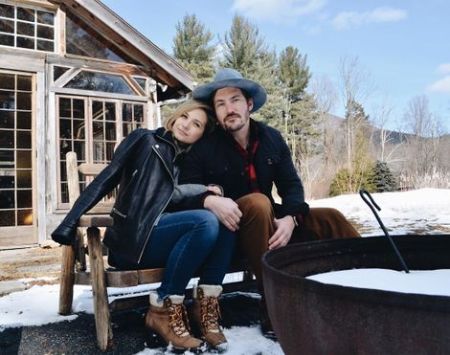 Despite a stable marriage, the pair has still not started a family. Fans all around the world are eagerly waiting for the couple to welcome kids in their lives.

Landon is a talented musician and is currently the lead singer of the band Harbor Party. In addition to that, he regularly tours with Frankie Valli & The Four Seasons. 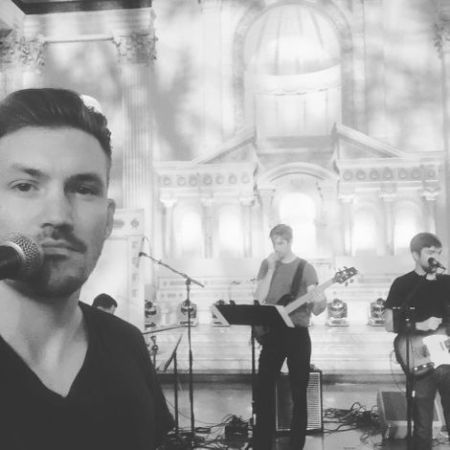 The 6 feet tall, Beard is also a talented actor and has worked in the project such as "In My Cards" and "Gravity." He was last seen in the movie "Generation Um..." in 2012 alongside superstar Keanu Reeves. From all these professions, he is able to earn a steady income, and as of Feb 2020, he has a net worth of $200,000.

Wife Is A Millionaire

Landon's wife is a popular actress and singer who is known for her work in hot-shows such as "Pretty Little Liars," "Suits," and "Blue Bloods." As of Feb 2020, her networth is estimated to be $3 million.

Vanessa Ray is a actress who is most famous for potraying the character of CeCe Drake in the series Pretty Little Liars.