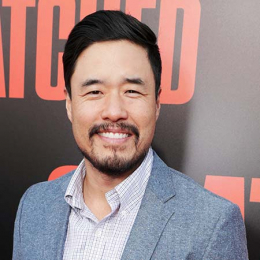 American actor, Randall Park is best known for his work in the films like The Interview, Ant-Man and the Wasp, and Aquaman. He is also famous for starring in the television series like Fresh Off the Boat, The Office, Fastlane, and Las Vegas. He won the Coalition of Asian Pacifics in Entertainment New Writers Award for his television pilot script, The Erasists.

Randall Park is married to the popular Korean-American Actress Jae Suh Park in 2008. The pair tied the knot in a private ceremony among their close friends and family after dating for several years together.

The couple shares a good bond and is together from over a decade. Further, the pair recently celebrated their eleven years of the marital relationship. What's more, they are currently living in the San Fernando Valley in a healthy relationship.

With my beautiful and talented wife @thejaesuhpark. I didn’t step on her foot this time! — Thank you to @veronica.graye @eleazarmethod and @jhizet.They are the best in the biz. #alwaysbemymaybe

The couple is blessed parents of their only child who is a daughter. The duo is private regarding their child as they do not share much about her. Besides, it is known that she made an appearance in one of Randall's web series named Baby Mentalist.

Randall is out of any media controversies and is out of any affair rumors. It seems like the actor is happily living with his spouse as there is no sign of divorce between them. Additionally, he is an active social media user where he shares much daily life and acting life posts.

How much is the Net Worth of Randall Park? Know about his Earnings, Salary

Thank you to the brilliant @e_alexjung for the beautifully written piece in @nymag. @vulture (: @coolwaves)

Park started her career in the film industry by working in the 2009 film named The People I've Slept With. Since then, she worked in many films like Dinner for Schmucks, Larry Crowne, The Five Year Engagement, Sex Tape, Long Shot and Always Be My Maybe. Besides, some of his blockbuster movies are,

Apart from his acting career, he co-wrote the 2005 film American Fusion. Further, he also created, directed, written, and starred in several short internet series like Channel 101, including Dr. Miracles, The Food, and Dumb Professor. He also wrote a short film named Blueberry.

Randall Park is married to the famous Korean-American Actress Jae Suh Park in 2008. They tied the knot in a private ceremony after dating for several years.